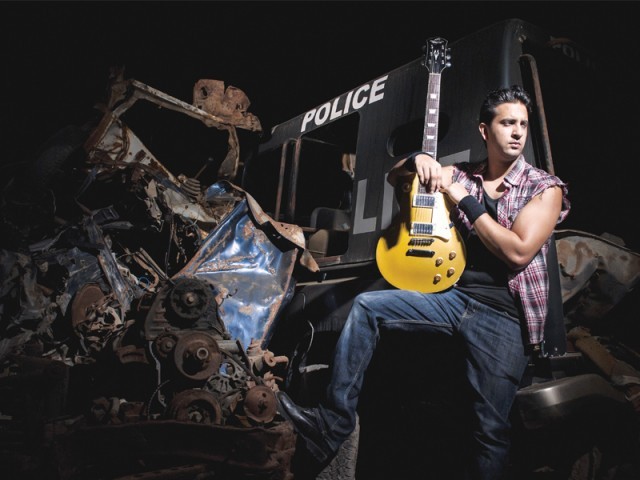 The video is about how love, humanity and harmony don’t exist anymore. PHOTO: PUBLICITY

He emerged in the Pakistani music scene in 2011 with his album Vice Versa, offering music which is loved by many. His sound is metal — somewhat alien to Pakistani musicians. Making a brave effort and despite the lack of commercial support, Taimur Tajik continues to breathe new life into Pakistan’s metal scene with a new video, new sound and the brutal new album, Order for Disorder.

His new video of the title track is about how love, humanity and harmony don’t exist anymore. Arguably, they never were. Order for Disorder is an uncensored, socio-political commentary on how we see the world and how the media distorts our perception of the truth. The Express Tribune caught up with the gifted artiste in an exclusive pre-release interview.

How has the response been to Vice Versa?

In a place like Pakistan, English music is at a huge disadvantage — let alone English hard rock music. But with that in mind, the response has been much better than what I was anticipating. People are really reaching out over social media. Not just here, but abroad as well. A couple of international entities have started promoting me. That just goes to show that the music is going places on its own.

What publicity have you received internationally?

There’s a guy named Mark McIntyre who runs a live Internet streaming radio station out of the US, Guerilla Radio; he started airing my music regularly on his stream. In June, one of my tracks Paralyzed (from Vice Versa), was voted number one by his listeners on a top 10 countdown. There’s another guy named Andy Millen, based in the UK, who has given me extensive coverage online. He recently featured my upcoming album on MetalTalk.net. The way I see it, if my music can catch the ear of people abroad and hold its own against so many amazing international bands, then I must be doing something right.

You admit that your genre is ‘niche’. So why invest so much in creating something that doesn’t have mass appeal?

Firstly, I do it because I love it. Secondly, true hard rock and metal listeners are some of the most amazing fans any artist can have. I’d rather make music for a handful of them than for a million Bieber fans. Thirdly, it’s the only type of music I really know how to make.

Tell us about the new album Order for Disorder.

Order for Disorder has been a trip to write, perform and produce. It has been a great creative release. It’s heavy as hell and completely uncompromising. Listeners can expect 10 original tracks, most of them with huge guitars, blazing solos, screaming vocals, heavy riffs, and tons of crash metal drumming — the way any hard rock album should be.

What did you do differently on this album as compared to the last?

Inspiration came from anywhere and everywhere. We invested a lot of time listening to original mixes of GNR, Black Label Society and various others, dissecting their tones and mixes. We then spent a great deal of time replicating those elements to create bigger and better sounds. We put a lot of effort into the live kit set-up. A lot of bands in Pakistan get away with using sequenced or electric kits, which to me fail in comparison to the sound of a live kit. I could be wrong, but I think this is also the first album in Pakistan to feature an analogue talk box on one of the tracks.

The Order for Disorder video seemed to be well-received online. What was the inspiration?

The concept was mine but Faraz and Haider Azim really brought the video to life. Osama Tahir’s acting also took it to the next level. I wanted to make a video that shook people up a bit. Performance videos have very short lifespans so I wanted to do something that made people think a little. The video is a socio-political commentary on the degeneration of humanity. While we were coming up with the concept, the Palestinian-Israeli conflict was reaching another one of its boiling points. I couldn’t help noticing the disparity in the types of safe and distant images on mainstream media versus the sad and disturbing images circulating all over the Internet.

We heard that you met your guitar idol, Slash. How did it feel?

Completely and utterly surreal! I met him backstage after a concert in Dubai. I waited for about two hours until he came out to sign autographs. While he was signing my cocktail napkin, I just stood there in disbelief. But after mustering up the courage, I said, “I just wanted you to know that your music has inspired me and changed the way I live my life. And I just wanted to say, thank you”. He shook my hand and smiled. It was awesome. I ended up framing the napkin and mounting it on my wall at home.

Movies and magazine covers, not enough for Kareena