I believe in good music, whatever the genre: Rahat Fateh Ali Khan

I believe in good music, whatever the genre: Rahat Fateh Ali Khan

Singer sits down with The Expres­s Tribun­e in an exclus­ive tete-a-tete.
By Sher Khan
Published: September 11, 2013
Tweet Email 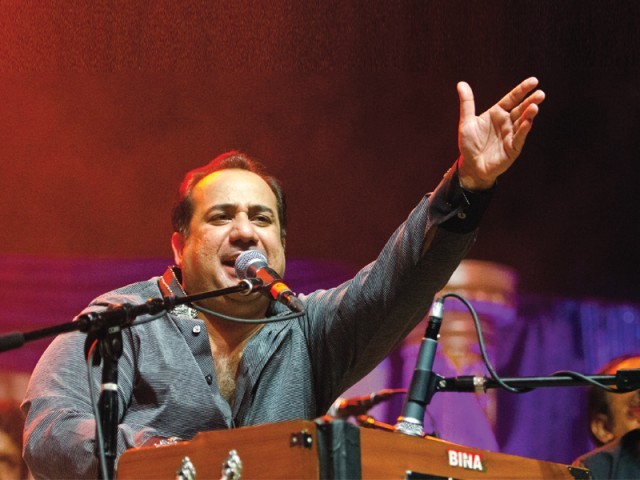 Rahat feels that Bollywood has allowed him to collaborate with the industry’s best composers. PHOTO: PUBLICITY

Bollywood music is all about romance and with Rahat Fateh Ali Khan’s incursion into the industry, the bar has been elevated to another level. From Tere Mast Mast Do Nain, Sajda and Main Tenu Samjhawan Ki, the ball game seems to have changed entirely as no one can match his vocal knack or the tenderness in his voice. While he wasn’t always in the limelight as a qawwali artist, his foray into Bollywood clearly illustrates that this genre of music is where his expertise lies. And today, he is justly the most sought-after singer in this part of the world.

Despite being the iconic Nusrat Fateh Ali Khan’s protégé, Rahat seems to almost always shy away from the spotlight. With minimal interviews to his name and an aura of mystery surrounding Rahat, The Express Tribune finally caught up with the playback singer. “It’s true that I have chosen to be relatively reserved with the media but it is something which is purely unintentional,” says Rahat, pointing to his busy schedule. “This is something I wish to change, and as an ambassador of my country, I believe people need to know more about the activities undertaken by their fellow countrymen.”

When it comes to creating music, the maestro admits that he needs to work in solitude. “I like to work in an environment that is secluded and allows me to concentrate on my music,” he says about his swanky farmhouse on Bedian Road (or to him, his humble abode), which has been transformed into an extensive music studio. “I am able to control the quality of the sound I record and ensure that my fans get only the best — something they expect from me.” The title song for Ishq-e-Mamnu was recorded there and he is also working on his upcoming music album, which is scheduled to release by year end.

From qawwali to playback singing

“Bollywood gave me the chance to collaborate with the industry’s best composers,” says Rahat defending the switch he made. “And I embraced the transition well. For me, playback singing has been wonderful in terms of my own growth.” He feels the industry provides musicians with opportunities to learn as well as helps them establish a wider presence and name for themselves in the music arena.

While traditionalists didn’t hold back in making any comparisons when he ‘turned his back’ on his qawwal origins, Rahat feels it was inevitable and people were bound to talk. But the singer remains adamant on growing as an artist, experimenting and trying out different projects. “I starting singing qawwali at the age of 15 with my [uncle] Ustad Nusrat Fateh Ali Khan,” he recollects. “And as I have grown as an individual, I have also wanted to grow as a professional and diversify. I believe in good music, whatever the genre.”

Commenting on the current situation of the Pakistani film industry, Rahat feels it never reached great heights but is hopeful that things can change if investments are made. “Right now, our major hurdle is not that we lack talent but it’s that we don’t have the resources to make good quality motion pictures,” he sighs. “We need huge investments. I wish our government gives this important industry its due attention, and sets aside a sizeable budget for arts and entertainment.”

Apart from playback singing, for the local industry and Bollywood, Rahat is keen on releasing his own music album. “When I play and produce my own music, it provides me with a unique sense of fulfillment unlike any other. Artists shouldn’t just sing for others but should also produce their own music,” he says.

However, it will be released by an Indian company by the end of the year as he hasn’t been able to find himself a suitable distributor in Pakistan. “There was a trend when artists would launch their own albums in Pakistan instead of singing for others, but that seems to have become obsolete,” he regrets.

Rahat is set to go on tour with his band and will be seen performing in Cardiff, Birmingham, Nottingham, Manchester, Leicester and Leeds.