Under the lens: A peep inside Ali Zafar’s life

Under the lens: A peep inside Ali Zafar’s life 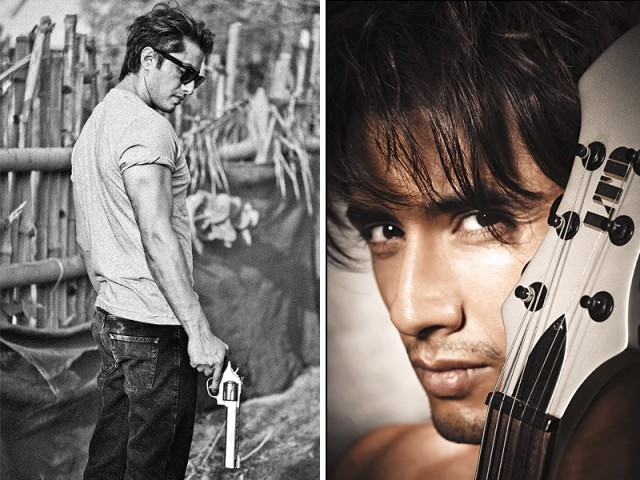 Actor-singer talks about his journey to stardom and upcoming projects. PHOTOS: PUBLICITY

While we all love to hate him, Ali Zafar has indisputably built a name for himself. With valiant efforts and of course Channo Ki Aankh, he catapulted straight to stardom.

Be it the cheesy lyrics, catchy tune or his eccentric voice quality, the single was on everyone’s lips whether they liked it or not! His dream however, didn’t end there. He decided it was time to jump on board the Bolly train with movies such as Teray Bin Laden and London, Paris, New York. And currently, he’s busy working on two more – rom-com Aman Ki Asha and action-thriller Kill Dill – along with a fourth studio album.

The journey of a star is never a hassle-free one and things were no different for Zafar. “A lot of dreaming, believing and hard work goes into it. You sleep it, eat it, wake up to it, live it, breathe it and most of all, you stick to it, be it music, films or sketching in a lobby,” he says about how his dream came true. “It’s important to follow your instincts and I did that – I gave into my passion for music and acting.” He feels everyone faces obstacles but it’s how you deal with them, which makes all the difference.

“Growing up, I used to watch a lot of Amitabh Bachchan movies and later, when I was a bit older, I watched Dilip [Kumar] saab’s,” Zafar says on his inspiration to act. “People remember them even today for the characters they played. And I would love to do play such roles that would leave a mark.”

When it comes to having a conscience, Zafar insists that he has one and he portrays it via his selection of movies. “When I choose a script, I keep general values of my home country in mind. I don’t accept roles that don’t appeal to me,” he asserts, adding that he’s only signed those movies which he felt he could relate to. But would he be interested in working in our local film industry? “I’m not against [the idea of] working in Lollywood or anything. It’s just that I haven’t been offered anything substantial yet.”

“It’s thrilling to see the Pakistani film industry going through a renovation and hopefully, it will be revived back to its glorious days,” Zafar adds sanguinely. “However, I’m not an expert in forecasting trends, but I think it’s on the right track.”

It’s important to not forget your roots and Zafar remembers them vividly. He started his career off with music, and despite working in one of the largest film industries in the world, he isn’t ready to give up his singing career.

“I guess I’m good at multi-tasking – I divide my time equally and stay dedicated to each discipline,” he explains. The increase in work load has not deterred him in any way from achieving his goals. “After all, I love doing what I do and I wouldn’t have it any other way. Even when I’m shooting, I can very well be writing a song or composing music simultaneously.” At the shooting of his film Chashme Baddoor, he admits that he was busy recording music for another movie in his free time.

Zafar reveals that his fourth music album is currently in production, and the heart-rendering melodies will surely be a treat for his fans. He also highlights that the music scene in Pakistan has always been alive. “And I’m doing my part in contributing to the music industry as are others – I think it’s very adequate,” he says. “I will always be a part of the music industry as I started my career there.”

From fashion to costume designing, Munib Nawaz takes a leap of faith