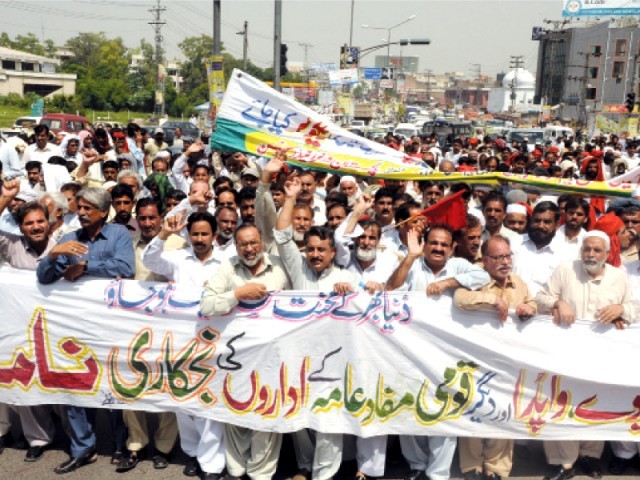 Workers and members of Wapda and Railways unions protest against ‘cruel’ policies of the PML-N government. PHOTO: WASEEM IMRAN /EXPRESS

Workers belonging to government and private institutions on Wednesday held a demonstration at Benazir Bhutto Road and blocked the bustling nerve centre for an hour.

Hundreds of protesters assembled under the banner of Pakistan Workers Confederation (PWC) and observed a ‘protest day’ against rising poverty, unemployment and the continuous increase of petroleum prices. They urged the government to take practical steps to resolve the miseries of the common man.

Protesters carried banners and placards inscribed with messages against privatisation of government institutions and reduction in inflation.

Speaking at the occasion, PWC Deputy Secretary General Muhammad Akram criticised the Pakistan Muslim League-Nawaz government, saying it has failed to eliminate problems being faced by workers of the country. He alleged that the government is privatising institutions like Water and Power Development Authority on the directions of the International Monetary Fund and World Bank. “Instead of restructuring their own institutions, the government is privatising them which is unfair’’ he added.

The protesters said workers form the backbone of any country and thus their grievances should be addressed immediately. They also demanded that the government regularise contractual employees working in different departments and to increase their salaries. They urged the government to fix minimum wages of government employees at Rs18,000 — a promise made by PML-N chief Nawaz Sharif during his election campaign.  Later the protesters marched towards Rawalpindi Press Club to record their protest.