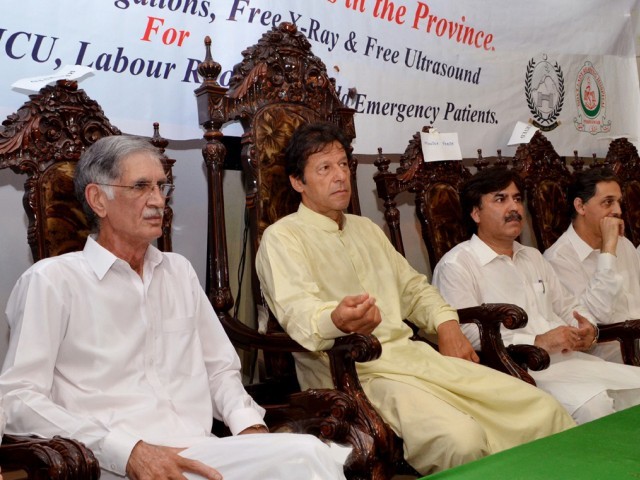 Imran Khan on Wednesday admitted his party was a month late in bringing much promised change to Khyber-Pakhtunkhwa – change which was the cornerstone of the Pakistan Tehreek-e-Insaf’s (PTI) election campaign.

The party chairman made the admission at the Lady Reading Hospital (LRH) where he announced free emergency treatment in all government hospitals in the province. Minister for Health Shaukat Yousafzai had made similar promises on August 5 and August 14.

Flanked by Chief Minister (CM) Pervez Khattak, Yousafzai, Secretary Health Dr Fakhri Alam and LRH Chief Executive Dr Arshad Javed, Imran stated the process of change has started in K-P. Provision of free health facilities to the impoverished is the first step, he claimed, and directed hospital authorities to provide free treatment to every person in the hospital.

The education sector is next in line for ‘change’ as the PTI plans to provide free and uniform education throughout the province. According to Imran, K-P will be a model province which others will follow.

Also speaking on the occasion, Khattak maintained the PTI-led government will eliminate corruption from every department. Surveillance cameras have been installed at police stations to keep a check on the police and ensure everyone in the province gets justice, he added. Not a single corruption case has been reported against PTI leaders, according to Khattak.

Rs1 billion has been released for the provision of medicines and improvement of health care facilities, informed Yousafzai. According to him, this was the first installment of funds and more money would be released based on success rates of hospitals.