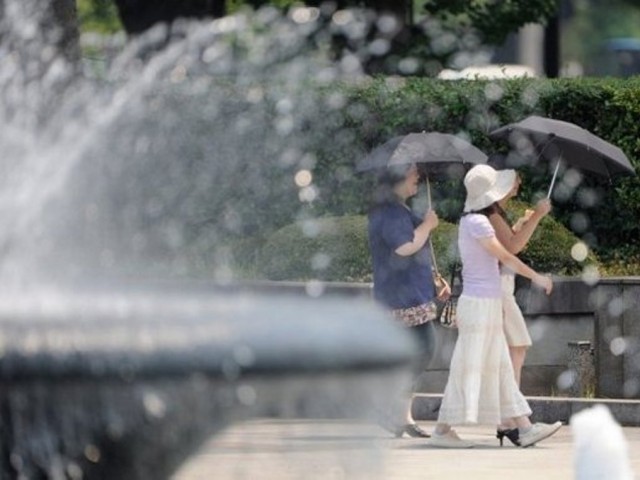 Women use umbrellas to shield themselves from the sun in Tokyo on July 23, 2010 after the heatstroke had resulted in 66 deaths. PHOTO: AFP

TOKYO: The west of Japan had its hottest ever summer this year, official figures showed Monday after a season in which heatstroke killed dozens and hospitalised tens of thousands nationwide.

The average temperature from June to August was 1.2 degrees Celsius higher than the seasonal average, with the mercury hitting a record 41 degrees Celcius in western Kochi on August 12, according to the Japan Meteorological Agency.

That broke the old high of 40.9 degrees Celsius in August 2007 registered in two central Japanese cities.

One week in August saw temperatures of 40 degrees or more for three straight days in parts of Japan.

Of the nearly 54,000 taken to hospital suffering from heatstroke over the three months from late May, 87 people died, the Fire and Disaster Management Agency said.

Japan’s west covers the business hub of Osaka and the ancient city of Kyoto as well as Kyushu and Shikoku, Japan’s third- and fourth-largest islands.

Eastern Japan also had a hot summer, with average temperatures 1.1 degrees Celcius higher than normal, making it the third hottest on record, the weather agency said.

The hot summer followed an early end to the rainy season, sparking fears over dwindling water supplies that saw scientists resort to cloud seeding to top up reservoirs that serve the 35 million people of greater Tokyo.

However, in western Japan a number of days of very heavy rainfall caused problems, with landslides and flooding in places.

Yamaguchi prefecture in the west of Honshu recorded 14.3 centimetres of rain in an hour on one occasion in July.