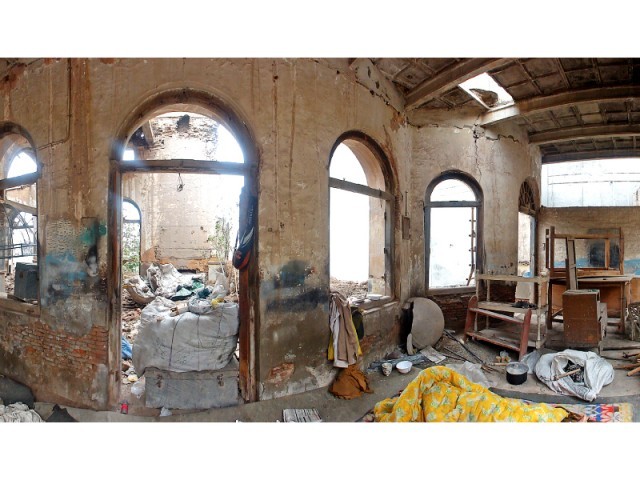 Photographs of the exterior and interior of the building depict the extent of decay. PHOTO: SHAFIQ MALIK/EXPRESS

Bangla Ayub Shah speaks volumes in its silence – its history, like that of the Afghan chieftain it is named after, is deep and all encompassing.

Today, this monument of the Sikh period, which ended in 1849, is under serious threat from commercialization. Despite the ban on construction, according to the moratorium since 2008, a large plaza has been illegally constructed right next to the bangla which is located inside the Kashmiri Gate.

Today, the structure, once regal and grand, stands dilapidated and forlorn – a fate shared by many historic monuments in Pakistan.

The monument is in a terrible state right now, its courtyard being used as a garbage dump. Currently under the control of Town Municipal Administration (TMA), its possesion will be passed on to the Walled City of Lahore Authority (WCLA) in a few months. The WCLA has plans to restore the monument.

“The dump is further damaging the bangla which is already in a derelict condition,” explains Talib Hussain, a culture and heritage expert at WCLA. “The building might collapse if this the situation continues. Our team made an attempt to go inside the premises but the guards and the man in-charge of the site did not let them enter. This is a grave matter and needs to be addressed immediately.”

Kamran Lashari, the DG of the WCLA, agrees.

“It is too sad,” says Lashari. “The historical site has almost fallen apart.”

Lashari wrote a letter to the District Coordination Officer (DCO) Lahore on July 31, raising his concern. The letter was, in turn, referred to the town municipal officer. It had stated that the bangla is a high architectural value asset. ‘Secret escape tunnels’ emerged from this monument and led to River Ravi and Delhi Gate. It accentuated the need to investigate the matter immediately.

However, no action was taken place against the illegal construction so far.

“It’s unfortunate that our authorities do not have a heart and are not sensitive about rich national heritage sites,” says Tania Qureshi, a communication expert at WCLA. “Despite efforts, nothing has been done to stop the construction, being done illegally right under the nose of the TMA.” TMA Ravi Town Sardar Ahad Dogar said they were looking into the matter. When contacted again with further questions as to why no such action has been taken so far, his phone was switched off.

Unfortunately, the bangla’s fate is shared by many other monuments of high architectural and historical value. Many structures, once magnificent, now lie in decay and deformity.

Amongst others, these include the tomb of Bibi Jawindi, the mausoleum of Mai Meharban, the Shahjahan Mosque in Thatta, the Badalpur Stupa and the Taxila monastery.

The shrine for Bibi Jawindi is situated in the south-west corner of Uch and was, at one time, considered to be one of the most impressive monuments of the city. Sadly, the tomb has broken apart. Half the structure was washed away during the floods in 1817.

The mausoleum of Mai Meharban has seen similar decay.  As probably the oldest living structure in Multan, it is in great need for attention. It was built between the 5th and 12th centuries, according to the archaeology official. Although the archaeology department has decided to conserve the main body after funds were released by the then chief secretary in January, no action has been taken so far.

The Shahjahan Mosque in Thatta, constructed in 1647 by the Mughal emperor, is one of the world’s largest mosques and has 93 domes. Shahjahan gifed this to the people of Sindh for their hospitality. This red-bricked, blue-tiled structure also needs to be conserved.

In the same vein, the Badalpur Stupa and monastery in Taxila, dating back to the years 2 and 5 AD, is also crumbling. It is being used as a grazing ground for animals. When excavated in 2005 by the Department of Archeology, hundreds of Buddhist remains, including gold silver coins, jars, pottery and statues, were unearthed.

‘Need of the hour’

Maqsood Ahmad, deputy director of the archeology department, believes that it is high time to conserve and restore Pakistan’s decaying monuments.

“It is the need of the hour to save the natural heritage of the country. By conserving these monuments which are vanishing with the passage of time, the government is committed to preserving such sites,” he says. “We are all set to preserve the Rohtas Fort, Mai Meharban’s mausoleum in Multan, and other monuments. The conservation work will begin soon.”