The releas­e had been sped up as a goodwi­ll gestur­e to India, offici­als say.
By AFP
Published: August 23, 2013
Tweet Email 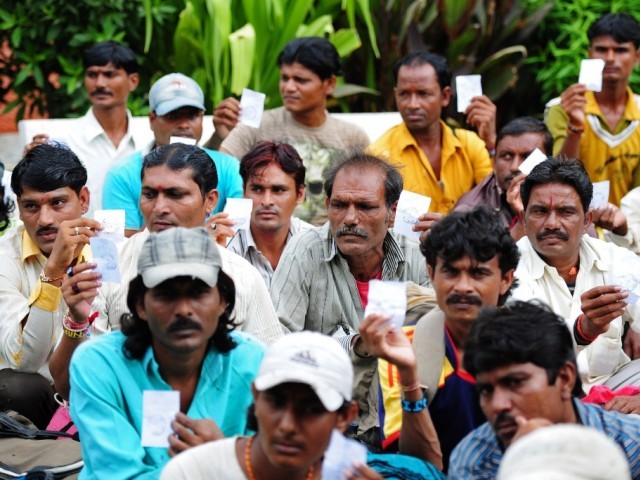 Indian fishermen hold up documents as they wait for transport after their release from prison in Karachi on August 23, 2013. PHOTO: AFP

The move is part of an understanding between the two countries to release citizens who mistakenly stray into each other’s waters.

“Today, we have released 337 Indian fishermen and seven other juveniles and they are leaving for Lahore,” where they will be handed to Indian authorities at the Wagah border crossing on Saturday, Shuja Haider, a senior official at Karachi’s Malir jail, told AFP.

The release had been sped up as a goodwill gesture to India, officials said.

Sporadic firing in recent weeks across the heavily militarised LoC, the de facto border in Kashmir, has sent tensions between the neighbours soaring.

The latest round was triggered by a raid on August 5 that left five Indian soldiers dead, blamed by Delhi on the Pakistani military. Islamabad has denied the claims and struck a conciliatory tone, urging restraint and dialogue.

Fishermen from both countries are frequently held for straying across the disputed and poorly defined maritime boundary in the Arabian Sea.

After Friday’s release there are still 97 Indian fishermen and three other Indian nationals including a juvenile languishing in jails in Karachi.

Kousan Rama, 40, who had been held for the last year, said: “I am very happy to be going back home. My family will be delighted to see me back at home.”

He called for a peaceful resolution to the Kashmir dispute.