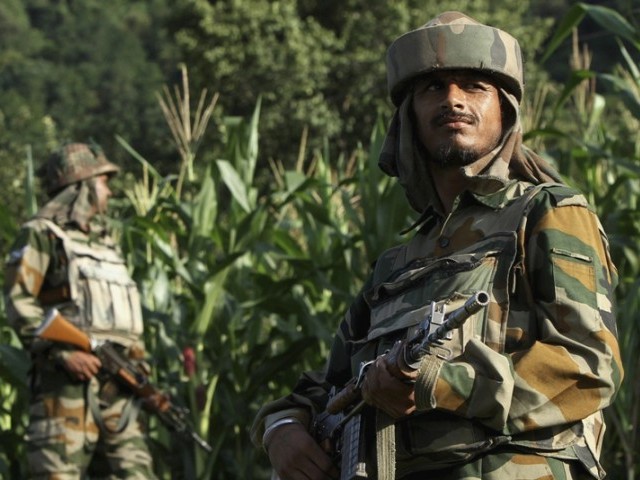 Indian army soldiers patrol near the Line of Control, a ceasefire line dividing Kashmir between India and Pakistan, in Poonch district in this August 7, 2013 file photo. PHOTO: REUTERS/FILE

SKARDU: The Pakistan Army has said that one officer was killed and a soldier was wounded by Indian firing along the disputed border in Kashmir, Express News reported on Wednesday.

The Indian army started firing at 11:15pm last night in the Batal, Nakyal areas near Skardu. The Pakistani army retaliated by firing as well. The exchange of bullets continued until 2am.

This is not the first time that Indian forces have been allegedly involved in unprovoked firing or shelling, the LoC that has seen allegations of cross-border firing from both sides in recent weeks.

The attack is the latest in a spate of recent cross-border skirmishes between the two neighbours.

The two sides agreed to a ceasefire along the LoC in November 2003, but skirmishes have flared across the heavily-militarised Line of Control (LoC), the de facto border in Kashmir, in recent weeks, with both sides blaming each other for having violated the agreement.