Umar ruled out of Zimbabwe tour

Umar ruled out of Zimbabwe tour 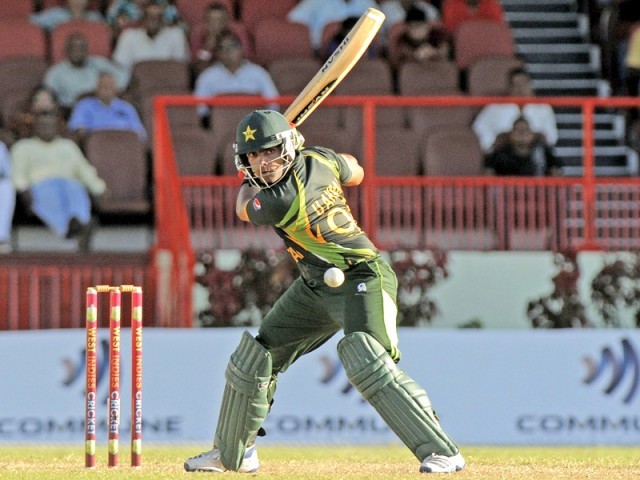 Umar suffered a back strain while playing in the Caribbean Premier League (CPL) where he was performing dual duties as wicket-keeper and batsman. PHOTO: AFP

Pakistan suffered a major loss as batsman Umar Akmal was ruled out of the One-Day Internationals and Twenty20s of the Zimbabwe tour after being advised rest for a few weeks by specialists.

Umar suffered a back strain while playing in the Caribbean Premier League (CPL) where he was performing dual duties as wicket-keeper and batsman.

“Umar is out of the Zimbabwe tour after suffering a back strain in the CPL,” a senior Pakistan Cricket Board official told The Express Tribune. “The doctors have advised him to rest a few weeks and the team management will now be sending Sarfaraz Ahmed as his replacement.”

The talented middle-order batsman had presented impressive form against the West Indies by giving a good batting show, even though he gave an average performance as wicket-keeper.

Umar was Pakistan’s second highest run scorer behind captain Misbahul Haq against the West Indies in the one-dayers and he scored 175 from five matches at an average of 58.33. Additionally, he was responsible for 10 dismissals behind the wickets.

In the Twenty20 series, he top-scored for Pakistan with 55 runs from two matches, besides claiming two wickets.

Former Test cricketer Jalaluddin believes that it was not a wise decision to ask Umar to keep wickets in 50-over matches.

“This is a loss for Pakistan which was bound to happen because Umar is not a regular wicket-keeper,” said Jalaluddin.

“He should’ve been restricted to a dual role in only the Twenty20 format. The team management and selectors didn’t look into the consequences, making the decision in haste for the West Indies tour.”

“He is a tremendous batsman and a fielder, so asking him to keep wickets leaves Pakistan handicapped in two positions.

“We have Sarfaraz and Adnan Akmal who can be groomed into good wicket-keepers by giving them confidence. We should stick to them and let Umar concentrate on his batting.”

I’ll grab this opportunity with both hands: Sarfaraz

Sarfaraz has said that he would try to make the most of this unexpected call-up in order to give his career a boost.

“I’ll try to grab this opportunity with both hands because it’s an unexpected call-up for me,” said Sarfaraz. “My main aim is to do well as a wicket-keeper while scoring some handy runs for my team as well.”

Medical waste: What cures you may end up killing you – if not disposed properly