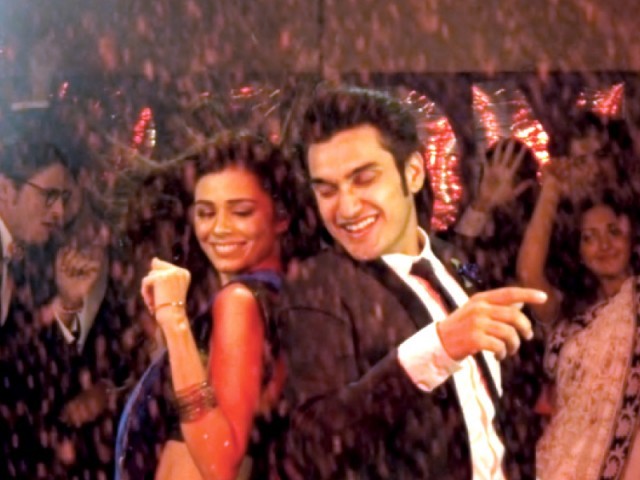 The dance moves incorporated into the video are based on a love story. PHOTO: EXPRESS

From listening to his music alone, fans of pop star Uzair Jaswal had only enjoyed half the experience of following the artist. But that all changed with the launching of a new video, ‘Bolay,’ which adds a new aesthetic dimension to Jaswal’s work.

Having started singing from the age of fourteen, the now 23-year-old Jaswal seemed to mature a little too soon for his age.

Known for his mellow tunes and deep meaningful lyrics, Jaswal has touched the hearts of his fans across Pakistan, which number in the thousands. “I usually do cheesy romantic or sad love songs, probably because I was going through an emotional phase in my life at the time of writing them, he said.

“I have earned the reputation of a hopeless lover. However, ‘Bolay’ is most likely to change that image.”

The song has an air of freshness about it and reflects Pakistani youngsters’ energetic side. Jaswal said he wanted to release a song which would resonate with people of his age group. “I wanted it to be young, preppy and fun with a tinge of humour, all of which the video highlights,” he said. The song’s music video is directed by Jaswal’s brother, Yasir Jaswal, who is also a vocalist for the band Call.

The dance moves incorporated into the video are based on a love story, as Jaswal explains. “It’s a simple storyline. At a prom night, a hopeless lover sees the girl of his dreams but doesn’t have the confidence to speak to her. Suddenly, he musters the courage to sing ‘Bolay’ for her to everyone’s surprise. It’s clichéd but cute,” he said.

Less than 24 hours after the video was released on social media, it received close to 1,000 likes and shares. “Despite the ban on YouTube, the response has been overwhelming,” said Jaswal.

His brother lamented the ban, arguing that it has had an adverse affect on the country’s established artists, let alone newcomers.

“It’s a drawback for Pakistani artists who are otherwise exposed to the international market through such mediums. There are other means through which objectionable content can be blocked,” he said.

“But we are confident that music will find its way. Social media is a powerful tool and we can go viral with its outreach to thousands of people,” he added.

A rendition of ‘Bolay’ was also featured in Coke Studio Season Five.  Jaswal explained that certain beats were added to the amended version of the song in accordance with the Coke Studio show’s production requirements.

“We were more conscious as it was a bigger platform, so some folk tunes were added,” he said.