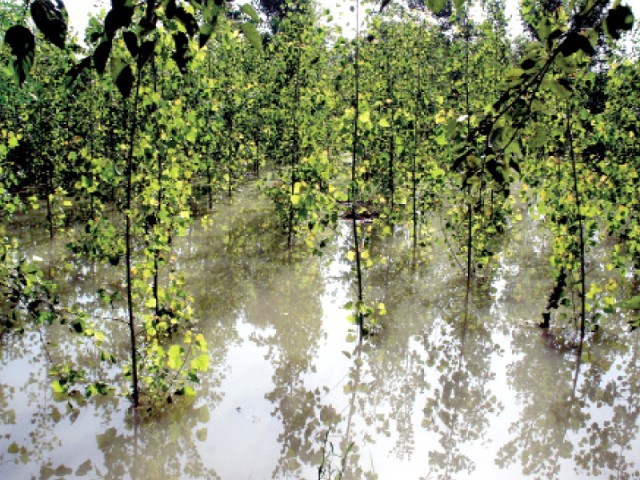 Floodwater enters fields in Peshawar. PDMA has issued a warning for residents near the river bank to evacuate. PHOTO: EXPRESS

At least 12 people lost their lives in rain-related incidents across Khyber-Pakhtunkhwa and the Federally Administered Tribal Areas (Fata) since late Wednesday night, while hundreds of families left their homes for safer abodes.

Four people were killed by flash floods in Tichi River while hundreds of acres of land was submerged in water, according to a political administration official. In addition, a fish farming site in Bangi Dar was destroyed and a bridge was washed away in Kanggi Algad. The exact number of houses damaged by the flood could not be ascertained till this report was filed.

Heavy floods were reported in Dahna water channel known as ‘Dahna Alqad’ along with other watercourses in South Waziristan. The water swept away protection walls in some areas and also damaged fruits and vegetable fields in Wana.

More than 15 houses were destroyed by floodwater in Shalozan Toi, Karman and Parachinar. A political administration official said heavy downpour caused flash floods in Kurram River, destroying more than a dozen houses while around 30 were partially damaged. Most of the roads in Parachinar and on its outskirts were washed away, restricting tribesmen to their houses.

Three teenage boys were killed by flash floods in Swabi. City police official Noorul Amin said they were informed the three boys drowned in Badri Khawr near Kala Darra area while trying to catch ducks in the water. The deceased were identified as Rukhsar, 16, Amjid Ali, 16, and Suleman, 17. The search for their bodies is ongoing.

Hundreds of families living on the bank of Indus River on the eastern side of the city were affected when floodwater swept across their mud-brick houses and huts. Slum areas such as Jokh Obchar, Jokh Mohana, Jokh Bilal and Jokh Mosso were inundated, resulting in widespread displacement of locals, most of whom are fishermen. As a result, the affected families escaped towards the city on boats.

Three minors were injured after the roof of a room caved in due to heavy rainfall in Balogram village of Mingora at around 1am on Thursday. The injured brothers, identified as Mohammad Iqbal, 11, Mohammad Bilal, 14, and Mohammad Yousaf, 14, were shifted to Saidu Teaching Hospital.

Water entered over a dozen houses in Palana Korona area of Litamber on the outskirts of Karak while the roof of a house collapsed in Gul Colony, killing Wakht Bibi along with her son Bostan. Bibi’s daughter Saiqa, Shadarra, and Shanta were severely injured and shifted to DHQ Hospital, Karak in critical condition.

A warning issued by the Provincial Disaster Management Authority (PDMA) late Wednesday night stated areas near the river banks in Nowshera, Charsadda and Peshawar should be evacuated due to increasing water level. Following the announcement, Rescue 1122 officials rushed to Nowshera and extradited people safely from the banks of River Kabul and Khyali in Charsadda.

People from Sar Daryab, Naguman, Shobra and Manzoray areas in Charsadda also vacated their houses along with locals from Azakhel, Nowshera Cantonment and other surrounding areas.

However, most people returned to their houses on Thursday afternoon after the PDMA stated there was no more threat from floods for the time being.

Around 25 houses and shops were destroyed when floodwater entered Jaghir Gol area of Chitral. No human loss was reported as people evacuated the area in time. Two houses were destroyed in Rambor valley of Kalash after which most of the hotel staff and tourists were told to move towards safer places.

(with additional input from our correspondents in Fata)