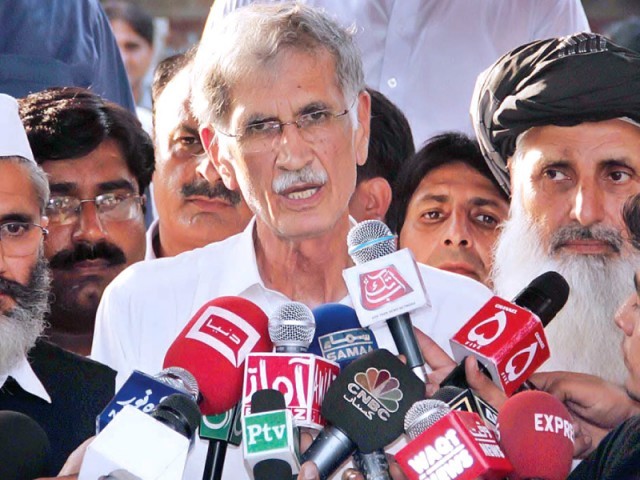 The Khyber-Pakhtunkhwa (K-P) government marked the country’s 66th Independence Day without the customary presence of the chief minister at the main flag hoisting ceremony held at Malik Saad Police Lines on Wednesday.

Celebrations in the city began with the army giving a 21-gun salute in Jinnah Park, followed by special programmes at the Peshawar High Court, Governor House and different government and private institutions.

As per standard procedure, chief minister (CM) was the chief guest at the main ceremony at police lines. However, just before the ceremony kicked off, it was learnt CM Pervez Khattak will not be attending the ceremony and Health Minister Shaukat Yousafzai and Information Minister Shah Farman will be presiding over the event instead.

“The chief minister was in Islamabad to attend a meeting with United Nations (UN) General Secretary Ban Ki-moon so he asked the health minister to attend the flag hoisting ceremony,” CM’s spokesperson and media advisor Shiraz Paracha told The Express Tribune.

Prior to the flag hoisting ceremony, no information was shared with the media regarding Khattak’s absence and his meeting with the UN general secretary.

As it was the first Independence Day since the Pakistan Tehreek-e-Insaf-led provincial government assumed charge, people were expecting their elected representatives to comment on the recent violence and bloodshed in the province. However, the occasion was marred by mismanagement.

A day earlier, the Peshawar Municipal Corporation (PMC), which was responsible for organising the ceremony, held final drills and rehearsals of national songs. But municipal school and college students were informed at the last minute the activities would not be taking place.

When relevant authorities were asked about irregularities plaguing the event, they blamed other departments for the mismanagement. “We were hosting the ceremony at police lines where we do not have any administrative authority,” said municipal administrator and chief organiser Rasheed Khan.

“The Press Information Department (PID) was given the responsibility of inviting journalists to cover the ceremony and later coordinate with them with the help of the police, but they failed to abide by it,” he added.