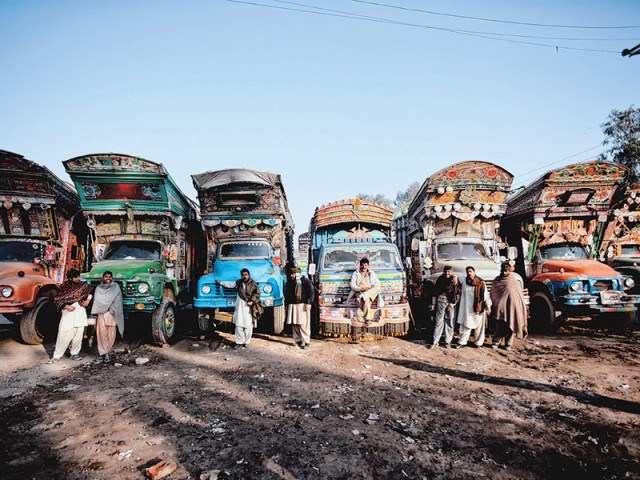 Some stereotypes celebrate people. We are thus not surprised that a 41-year-old German would decide to undertake a year-long journey from his home in the Black Forest across 11 countries, including Pakistan, in a hardy Land Rover Defender.

That man is Matthias Barth, a mechanical engineer, photo journalist and cinematographer, who has just exited Lahore after extensively capturing our truck art world. This is part of ‘Trucks.13’, a documentary for a German television channel and other smaller projects that seek to discover how art transitions from one region to another. Anyone can follow his route on the blog artcartv.blogspot.de with the help of Google translator. On it he details winding through Austria, Romania, Hungary, Bulgaria, Turkey, Iran, and Pakistan and he was last in India with Nepal and Tibet next on his list.

Happily, he has good things to say about Pakistan. “I came here for six days, but I stayed six weeks!” he told me. We were introduced by a Belgian friend over dinner at the well known Lahore Backpackers. Barth wanted to know where he could buy neutral density camera filters. This was how I learnt that he was working on truck art.

In Pakistan he has successfully managed to accomplish what he set out to. He did not have visas problems, unlike for Iran and India, as his blog says. His video camera and documents were stolen in Turkey. It has been a challenging journey. In fact, he said over email a month ago that he had not known if he would be able to photograph or shoot the trucks in Pakistan because of the political situation. “I knew that it will be very difficult,” he wrote. “So I got the escort team provided by the government. It took me seven days to reach Lahore and there I felt very safe.”

Barth was inspired to take on this work after doing a documentary on the artcar at the Burning Man Festival in the US last year. As in truck art, artcars are vehicles which have been artistically modified as a hobby. Carartists turn them into aliens, dolphins, cover them in leopard print, even beads. Perhaps one of the most famous examples is that of Andy Warhol, who was commissioned to dress up a BMW.

For the project, Barth abandoned the idea of flying to each destination and instead hit the road. His companion became the blue Land Rover Defender that he affectionately refers to as ‘Bluey’. He bought it from an Austrian mountain farmer who had modified it for the Sahara, replete with bulletproof loopholes. But as this made Bluey too heavy, they were removed as was the massive roof rack. The mobile home has a kitchen in the back and a roof tent and is customized to keep him safe and comfortable whether they are traveling through a European thunderstorm or the Iranian desert.

“I compare [Bluey] with a Turkish donkey,” Barth wrote on his blog in German. “Treat him well and he will work faithfully for you.” Indeed, it was only after 24,000km that Bluey needed some minor maintenance work in Lahore. “The mechanics here are improvisers,” he wrote. “It’s hard to find the right one. Each specializes in an activity. Thus I often go to the specialists. They all are very cheap and do a good job. Unfortunately they do not work as efficiently as a European mechanic — like the work will be postponed to the next day, but I got used to it quickly.”

But how was Barth going to add to the already large corpus of work on truck art? I told him that our truck art had gone to Melbourne in 2006 when artists hand-painted a tram there in this style. Last year, a 16-seater minibus named ‘Tiara’ (pronounced ‘tayyara’ or aeroplane) hit the headlines in the UK. A Pakistani named Dalawar Chaudhry had transformed the Mazda into a psychedelic truck art delight that was even rented by singer Bob Geldof for his 50th birthday party.

Aside from training his lens every aspect of truck art, which will be revealed in the documentary, the difference this time is that Barth has used the innovative GigaPan System to capture this world. This is a combination of cutting-edge technology software and high-tech hardware, developed by Nasa to capture photos of Mars and beyond the solar system. It was even used in military intelligence and virtual microscopy and Google Earth is its most famous product. Each gigapixel image contains one billion pixels (1,000 times the details captured by a one-megapixel digital camera). Robotic cameras capture hundreds and sometimes thousands of images. During post-processing, an image stitching software automatically combines them together to present one composite and ultra-high resolution image with great sharpness and clarity.

Thus Barth has documented and interviewed everyone associated with the truck art industry, from the mechanics to the painters, the drivers to the decorators and even the chai wallahs. He discovered, for example, why the truck drivers write Pilot Gate on the door of the driver’s seat. They describe themselves as pilots because, as they put it, they don’t drive, they ‘fly’!

Given that this is a work in progress, Barth was unable to share too many details. The good news is, however, that the project is expected to be exhibited in Germany by the end of this year. He has a lot of material to process and encountered hiccups in places like Iran where YouTube is banned. But suffice it to say for now that Barth has seen that truck art is not a one-man show. Many interconnected industries earn from it whether they are the painters, welders, accessory- and component-makers, sticker designers and printers. He has even captured how life revolves around them in the shape of a low wage rate, child labour and poor working conditions. Nothing has escaped his eye or the GigaPan technology.