Petition calls for award of Nobel Prize to Bradley Manning

Petition calls for award of Nobel Prize to Bradley Manning 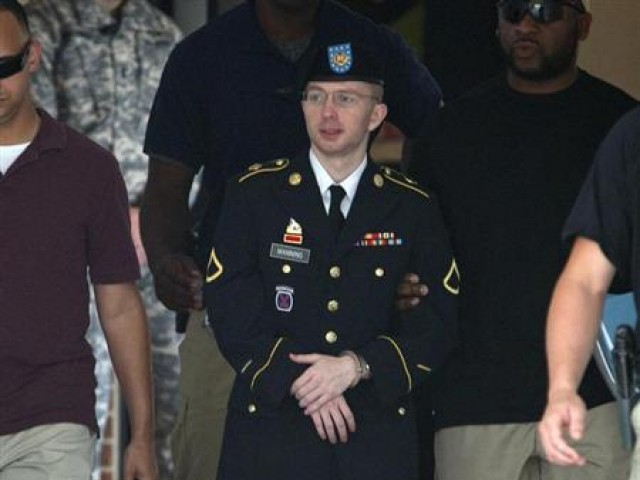 US Army Pfc. Bradley Manning being escorted out of a courthouse at Fort Meade in Maryland. PHOTO: REUTERS/FILE

OSLO: Supporters of Bradley Manning, the US soldier convicted of espionage for leaking secret files to WikiLeaks, the anti-secrecy website founded by Julian Assange, presented a petition to the Nobel Institute on Monday backing his nomination for the Nobel Peace Prize.

The petition, launched by the online activist organisation RootsAction, garnered more than 103,000 signatures.

Awarding Manning the prize would, the organisation said, clear “the cloud (that) hovers over the Norwegian Nobel Committee” for awarding the prestigious honour to US President Barack Obama in 2009.

Two months after the announcement and one week before Obama accepted the award, he decided to intensify the war effort in Afghanistan.

“No individual has done more to push back against what Martin Luther King Jr called ‘the madness of militarism’ than Bradley Manning,” the petition read.

“And right now, remaining in prison and facing relentless prosecution by the US government, no one is more in need of the Nobel Peace Prize,” it said.

A US military court found Manning, 25, guilty of 20 of the 22 charges of spying and disobeying orders lodged against him for having handed a large quantity of secret military reports and US diplomatic cables to WikiLeaks.

Manning faces up to 90 years in prison.
According to US journalist Norman Solomon, one of the organisers of the petition, awarding the soldier the Nobel would underline the important role played by whistleblowers in promoting peace and democracy.

“Unless we can speak the truth, then peace-making becomes a hollow exercise of rhetoric rather than reality,” Solomon told reporters before handing over the 5,000-page document to the Nobel Institute.

The chairman of the Institute, Geir Lundestad, has in the past said that such campaigns do not influence the Nobel Committee in its choice.

The 2013 winner of the Nobel Peace Prize will be announced on October 11 in Oslo.

Denouncing what he called “a normalisation of perpetual war”, Solomon, a former Obama supporter, said giving Manning the Nobel would restore some of the prize’s cachet after it was awarded to the US leader.

However, “there are now growing questions about the Nobel Committee’s commitment to human rights and peace,” he added.

Addressing the case of Edward Snowden, the fugitive US intelligence leaker, and Julian Assange, the Australian founder of WikiLeaks, Solomon criticised “the gradual but very strong trend from the Obama administration to rely on repression and threats and legal bludgeoning of government employees and others who believe in transparency”.