Offering Eid prayers: Not a given for everyone

Offering Eid prayers: Not a given for everyone 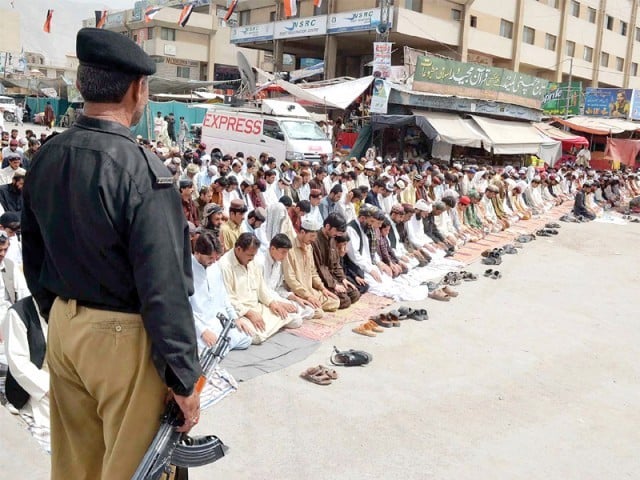 Just a day before Eidul Fitr, the streets leading to Aiwan-e-Tawheed— the central place of worship of Ahmadis residing in Rawalpindi — in Satellite Town was once again filled with banners cautioning residents about ‘unconstitutional activities’ of members of the area’s Ahmadiyya community.

The banners were placed following an attempt by the worship place’s administration to get permission from the city administration for offering Eid prayers at their worship centre, which has been closed for two years.

Even though the city administration denied permission on the pretext of the move fomenting a ‘law and order situation’, it provided a local trader’s action committee — affiliated with the ruling Pakistan Muslim League-Nawaz — with an opportunity to launch a fresh wave of hatred against the community.

This was the second year running that Ahmadis were barred from offering Eid prayers at their central worship place in the garrison city in the face of strong resentment and threats made by the action committee, which wants the site to be permanently closed down.

Jama’at Ahmadiyya Pakistan Spokesperson Saleemud Din, while talking to The Express Tribune, deplored the incident, saying it was unfortunate for community members living in Rawalpindi.

Din said the community members can’t fight with elements behind the hate campaign against them, adding that the community’s only other worship place in the city could only house around 200 people.

“A number of community members in Rawalpindi offered Eid prayers in Islamabad, while those who do not have transportation facilities available stayed at home,” Din said. He condemned the slack response extended by the city administration towards the issue.

“By not granting permission, the administration violated Article 20 of the Constitution that ensures a right to worship for every citizen of Pakistan,” he added.

Rawalpindi Commissioner Khalid Masood Chaudhry said they denied permission with the sentiments of local residents in mind, adding that the city administration would look into the matter to seek out a permanent solution. “The Rawalpindi police will be asked to submit a comprehensive report on the issue, after which the administration will come up with a solution.”

Many residents were unaware of the worship place’s presence in their neighbourhood until the issue was played up by the Khatm-e-Nabuwat Action Committee. They pressurised the city government to close down the worship place on the pretext of its location being a residential area.

The house was purchased by a member of the community some 20 years ago and later donated to the community, which converted it into a worship place around 10 years ago.

Oddly, three mosques of similar size in the same street have not drawn objections from the pressure groups.

On January 29, 2012, around two thousand people including activists of the banned Sipah-e-Sahaba Pakistan — now Ahle-e-Sunnat Wal Jamaat — and Jamatud Dawa, along with students from religious seminaries around Rawalpindi carried out a massive rally near the worship place against what they termed “illegal and unconstitutional act” of the community.

One of the worship place’s administration members told The Express Tribune that the local committee was not just causing a split between the Muslim and Ahmadiyya communities, but also between Muslims themselves.

“Across the world, it is common practice that the government takes stand for what is right but here the situation is complex. The hate-filled environment for our community has compelled the administration to back the wrong side,” he deplored.