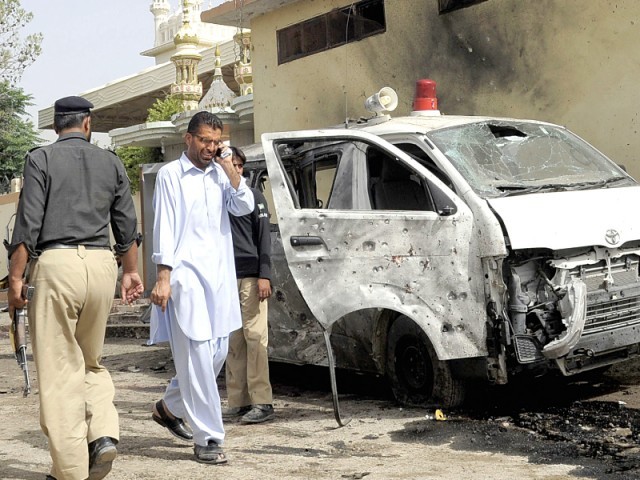 Police officials at the site of a suicide bomb attack in Quetta that killed many police officers and wounded dozens more. PHOTO: AFP

Millions of Pakistanis were robbed of their pre-Eid Chand Raat cheer on Thursday when many of them either heard or caught sight on television of the carnage wrought by a suicide bomber at the funeral of a senior policemen in Quetta. The attack plunged the country into grief, evoking strong condemnations from the country’s top leaders, including the prime minister.

At least 30 people lost their lives and over 40 others wounded, most of them policemen attending the funeral.

The bomber struck as officers gathered to pay their respects to their colleague, SHO Mohibullah, who was gunned down just hours before in the provincial capital. The grisly scene was captured live on several television channels as news crews covered the funeral, held inside the maximum security Police Lines – the headquarters of police in Quetta.

Talking to reporters, Inspector General of police in Balochistan Mushtaq Ahmed Sukhera said as many as 30 people, including 21 police officials, were killed in the attack. He added that 40 others were injured.

Other sources estimated the casualties were much higher.

“At least 38 people have been killed and more than 50 injured,” senior police official Mohammad Tariq told reporters. Police officer Rahim Khan had earlier put the death toll at 28 but warned that many of the injured were in a critical condition.

Police confirmed the attack was carried out by a suicide bomber. There was no immediate claim of responsibility. But hours later a spokesman for the Taliban claimed responsibility for the attack, saying it was a retaliatory action against the police.

Fayaz Ahmed Sumbal, the deputy inspector general operations and one of the most senior officers in Quetta, was among those killed, CCPO Mir Zubair Ahmed told The Express Tribune. Other senior police officials killed in the attack included SP Headquarters Mehrullah, DSP Shamsur Rehman, SP Traffic Mohammad Anwer Khilji and Inspector Shakeel Akbar. Five anti-terrorist force members were among the deceased as well.

Some of the dead and wounded were children attending the funeral, according to Provincial Chief Secretary Babar Yaqoob Fateh Mohammad. A son of the imam of the mosque at the police headquarters was among the dead as well, Doctor Syed Sarwar Shah told AFP at one hospital.

The majority of those wounded were police, ATF and Balochistan Constabulary officials.

Providing details of the incident, police sources said the suicide bomber made his way towards DIG Sumbal as soon as the latter arrived at the Police Lines, ahead of IG Sukhera. They said the bomber blew himself up after the DIG directed his guards to check up on the former, killing those attending SHO Mohibullah’s funeral.

Earlier in the day, SHO Mohibullah was gunned down by unknown assailants while heading home from a local market in Quetta’s Almo Chowk area with his children. The police official died on the spot, while his four children and driver sustained injuries.

Witnesses described the horror after the explosion.

“I was inside the mosque and we were lining up for the funeral prayers when a big blast took place. I came out and saw injured and dead bodies lying on the ground,” policeman Mohammad Hafiz told reporters. “I have no words to explain what I’ve seen. It was horrible.”

“Most of the bodies were beyond recognition. We collected body parts and flesh,” he said in the interview broadcast by a TV.

“Those who are killing people, even inside mosques, are not human beings, they are beasts. They are not Muslims, they have nothing to do with Islam. Allah will never pardon them,” he added.

According to the sources, the Balochistan IG and CCPO Mir Zubair were the prime targets of the attack on SHO Mohibullah’s funeral. “Had the two officials reached Police Lines any sooner, both of them would have been casualties of the attack,” a police official told The Express Tribune.

Home Secretary Akbar Hussain Durrani too said the two senior officials were the targets of the attack. He claimed the earlier attack on SHO Mohibullah was meant draw out the police top brass for the suicide bombing.

“The terrorists knew that the top brass of the police force would gather at Police Lines for the funeral prayers… they meticulously planned the suicide attack to kill the top police commanders at one spot,” he maintained. The home secretary questioned how the suicide attacker was able to avoid security and breach the police headquarters. “How was he able to dodge security at the heavily guarded Police Lines? Who helped him reach his target without being intercepted? That’s the million dollar question,” he asserted.

According to bomb disposal experts, the suicide vest used in the attack contained around eight kilogrammes of explosives. They added the vest used ball bearings as well.

The injured and the deceased had earlier been shifted to the Civil Hospital. However, as most of the staff there was on leave due to Eidul Fitr holiday, the casualties had to be moved to the Quetta Combined Military Hospital (CMH).

CMH sources confirmed they received 25 bodies and 40 injured. They added that 15 of those injured were currently critical.

Moon sighted: Nation to celebrate Eid as one today