Urdu floating at the edge of our Solar System

Urdu floating at the edge of our Solar System 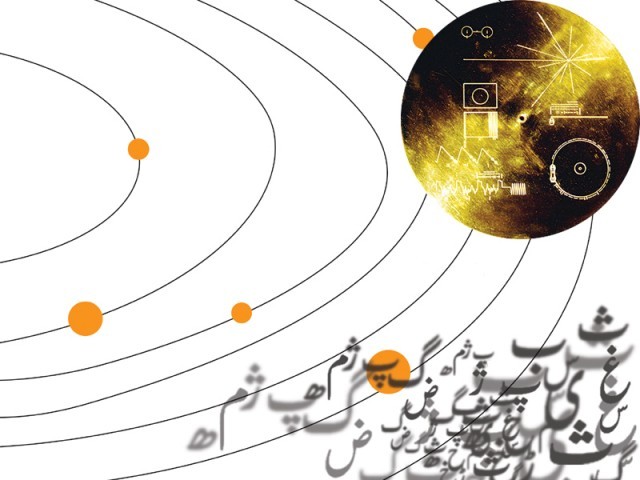 A golden record on Voyager 1 saves snippets of human culture just in case it meets new friends in space.

Assalam alaikum. Hum zameen kay rehnay waalon kee taraf say aap ko khush amdaid kehtay hain (Peace be upon you. We the inhabitants of this Earth send our greetings to you).

This greeting is onboard the farthest human-made object from the Earth: Voyager 1. Launched in 1977, Voyager 1 provided the first close-up pictures of Jupiter and Saturn, before starting its journey out of our Solar System. After 35 years of travels, it is now roughly 19 billion kilometers from the Earth. There is another way to think about this distance. A radio message from the Sun would take only eight minutes to get to us. From Voyager 1, it currently takes 17 hours! Furthermore, the distance between us and this assalam alaikum will only keep on growing.

Urdu is not the only language onboard. There are greetings in 55 world languages, including Akkadian, a language once spoken in Mesopotamia four thousand years ago. These greetings are stored on a golden record onboard Voyager 1. In addition to welcoming messages, the 90-minute record contains music (from Beethoven’s 5th symphony and Chuck Berry’s Johnny B. Goode to Senaghalese percussion and Raag Bhairvi), natural sounds (from wind and thunder to croaking frogs and bird songs), and 115 pictures depicting life here on Earth (you can listen to and see all the contents at goldenrecord.org). If in the far-far future, some alien race encounters Voyager 1 spacecraft, they will get a glimpse of life and culture here on Earth — at least as envisioned by astronomer Carl Sagan and his associates for Nasa in the seventh decade of the 20th century.

But in its outward journey, Voyager 1 can also tell us about the boundary of our Solar system. This is a hard task. There are no ceremonial displays of national identities, like at the Wagah border. There are no billboards in space saying that you are now leaving the Solar system. Nor are there any border checkpoints that may look at the nationality of Voyager 1 with suspicion.

One way to define the “border” of our Solar system is by its Heliosphere. Within this region we are likely to encounter most particles — electrons and protons, in this case — that are emitted by the Sun as part of its steady Solar wind. But, our Solar system also contains particles — mostly protons — that were once produced inside exploding stars and now fill up the space within our Galaxy. Instruments on Voyager 1 can distinguish between these two types of particles — the locals and the visitors from outside. The boundary of our Solar system, then, can be defined as the place where the number of particles from the wider Galaxy starts outnumbering the particles from our Sun. This is our border.

Just this past year, humanity’s farthest object reached such a border: the number of Solar wind particles dropped precipitously — by more than a thousand. During the same period of time, the number of particles from the Galaxy increased ten-fold. It seems that Voyager 1 is now in the process of entering interstellar space.

The spacecraft is not aimed at any particular star. But in 40,000 years, it will pass close to a small star named Gliese 445. We do not even know if there are any planets around this star, let alone any life capable of detecting and capturing Voyager 1. But if some thinking beings do end up playing the Golden Record, they will also get to see a picture of a lively street scene from Pakistan — inhabitants that speak Urdu. We will be long gone by that time, and it is impossible to predict the future of humanity four thousand decades from now. However, our Urdu greeting will sound as fresh as ever.

In the mean time, on this planet, Eid Mubarak!

Salman Hameed is associate professor of integrated science and humanities at Hampshire College, Massachusetts, USA. He runs the blog Irtiqa at irtiqa-blog.com