Plans are to broadc­ast the show in 60 countr­ies.
By AFP
Published: August 5, 2013
Tweet Email 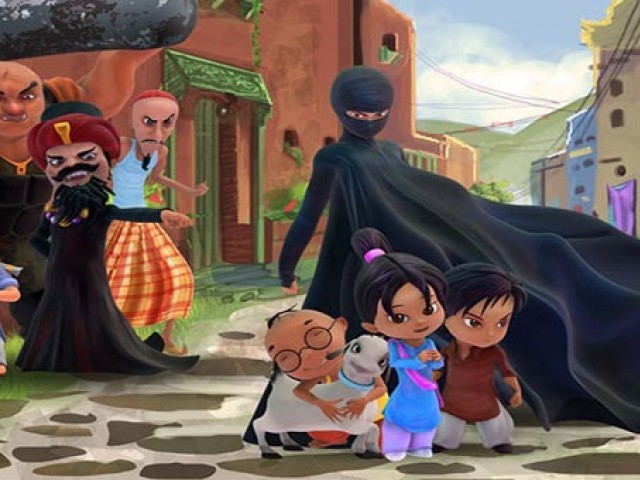 RAWALPINDI: Pakistan’s new cartoon superhero who fights bad guys disguised in a flowing black burka is set to go global, her creator told AFP, with plans afoot to broadcast the show in 60 countries.

The Urdu-language animation Burka Avenger, showing the adventures of a mild-mannered teacher who uses her superpowers to fight local gangsters trying to close down the girls’ school where she works, hit Pakistani TV screens last month.

The kids’ action-comedy struck a chord in a country where Taliban militants have prevented thousands of girls from going to school in the northwest and attacked activists campaigning for their education.

The man behind Burka Avenger, pop star Haroon Rashid, said he had been overwhelmed by the response.

“The reception has been absolutely phenomenal, beyond our expectations,” he said.

“We were making this little animated TV series for Pakistan but it seems like the whole world wants to know about the Burka Avenger.”

A TV distribution company in Europe has been in touch with a view to translating the show into 18 languages, including English and French, and screening it in 60 countries, Rashid said.

Malala, who campaigns for the right of girls to go to school, survived the attack and last month delivered a powerful speech at the UN in New York.

Rashid said Malala was a “real life superhero” for her courage and said the attack on her had come as they prepared an early episode of Burka Avenger.

“We were all stunned because we were working on the exact same story about a little girl who stands up to the bad guy who tried to shut down her school,” he said.

“I had never heard of Malala before then — it was like life was imitating what was on our screen while we were developing.”

Nearly half of all children in Pakistan and almost three quarters of young girls are not enrolled in primary school, according to UN and government statistics published late last year.

My visit to St Andrews, Scotland