Ready to mingle: MQM hosts a memorable evening, with a low turnout

Ready to mingle: MQM hosts a memorable evening, with a low turnout

The iftar hosted by the party was missin­g some of the key player­s from the PML-N and ANP.
By Our Correspondent / PHOTO: Mohammad Noman
Published: August 4, 2013
Tweet Email 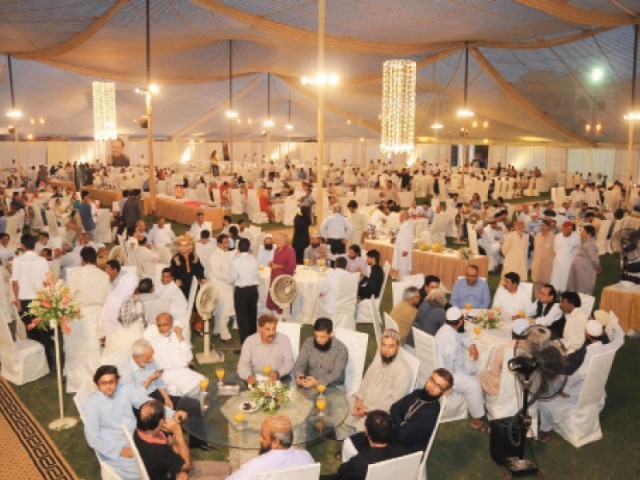 There was a lavish buffet for the guests in attendance, which included a large number of personalities from the media, at the iftar hosted by MQM on Friday. PHOTO: MOHAMMAD NOMAN/EXPRESS

KARACHI: It seemed on Friday that no expenses were spared by the Muttahida Qaumi Movement in hosting a grand iftar for businessmen, celebrities, media personnel and politicians – there was ample food under a marquee adorned with beautiful flowers but majority of the gold-coloured chairs remained empty.

The attendance of politicians was visibly thin as only a handful of politicians showed up at the iftar at Jinnah ground – MQM’s most recent friends, the Pakistan Muslim League-Nawaz, was a no-show while leaders of the Awami National Party were also nowhere to be seen.

One MQM leader had confidently predicted that Sindh Chief Minister Qaim Ali Shah would show up – after all, he was personally invited by the party leaders two days before the event.

“He will come just seconds before the Azan,” whispered one journalist.

But minutes before the fast was to be broken, the Pakistan Peoples Party delegation, headed by MPA Sharmila Farooqi, walked in. The chief minister, however, was nowhere to be seen. The delegation included PPP’s Waqar Mehdi, Sikander Mandhro, and Rashid Rabbani.

Farooqi, dressed in black clothes and high heels smiled when asked about the chief minister. “It does not matter that he (CM) is not here. Dil main jaga honi chahiyeh [There should be space in the heart].”

Similarly, Pakistan Muslim League-Functional Chief Pir Pagara was missing in attendance and instead sent his party workers, including Imtiaz Shiekh.

Party must go on

MQM leader Dr Farooq Sattar did look slightly disappointed at the low turnout but was seen mingling and having a good time with the guests. “We have been told that the chief minister could not come because of unavoidable reasons but we are thankful that he sent a delegation,” said Sattar. “I am thankful to all the political parties for sending their representatives.”

Overall the party was a hit, especially with journalists who were seen in a large number. Senior journalists, news anchors, bureau chiefs of news channels, and editors of English and Urdu newspapers sat grandly at one table. Reporters sat behind them, exchanging thoughts on why certain politicians were missing, the next strategy of the party and the controversial investigations in London.

Celebrities, including television actors Qazi Wajid and Shagufta Ijaz, were seen greeting people while comedian Umer Sharif in his shiny kurta was also strolling from one table to the other.  The MQM leaders, almost all dressed in their fancy kurtas and pyjamas, smiled and got their pictures taken with the ‘important’ guests.

Unlike past events, the MQM chief Altaf Hussain did not address the gathering. Instead his wishes were conveyed through the party’s deputy convener Khalid Maqbool Siddiqui before iftar.  He spoke a few lines on unity among all the parties, sects and ethnic groups.

As his welcome speech ended, the crowd got busy with the scrumptious pakoras, the sweet Dahi Barays and the fresh samosas. And for dinner it was the delicious biryani and the qorma which ended the feast for the guests.

At the iftar, Sattar made it clear that the party was not choosing sides and wanted to work with the PML-N in the federal government and with the PPP in Sindh. “We are in the opposition, and at the moment, we only want to improve ties with all the political parties,” he said. On the occasion, the MQM leader called for the revival of the Sindh Peoples Local Government Act 2012 with a few amendments. “Districts in Sindh should be given more powers.”

Listing problems: Transport fraternity to go on strike if demands not met