In a seven-course meal, curiou­s London­ers are treate­d to a pop-up dinner that takes them from Rangoo­n to Srinag­ar.
By Sanam Maher / Photo: Tooba Masood
Published: August 4, 2013
Tweet Email 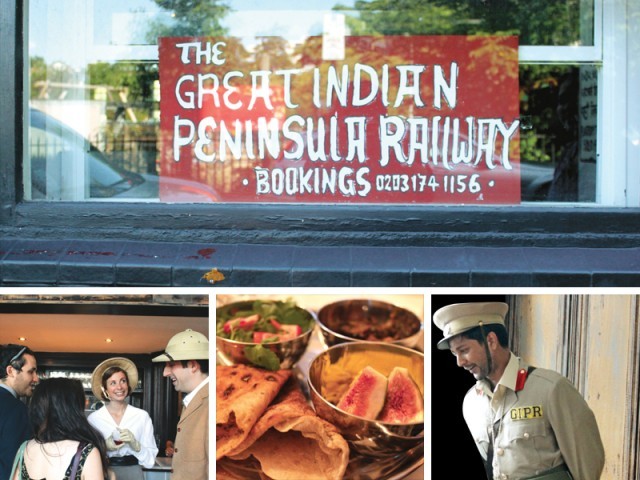 In a seven-course meal, curious londoners are treated to a pop-up dinner that takes them from rangoon to srinagar. PHOTOS: TOOBA MASOOD

Head down Northampton Road in London’s east end and you’ll find yourself in the waiting room of a train station from the 1920s in India, where a bejeweled lady in a mint green and gold shalwar kameez fans herself while cautiously keeping an eye on a leery ticket inspector. A woman in a safari suit, her hair a mass of pin-curls, clutches a glass of port as she scans the crowd on the platform for her son, Dickie, who ran away from their home in England to head to India. Her husband, a colonel, is laid up in their train compartment with a terrible case of dyspepsia.

The destination is Srinagar. The train journey begins in Rangoon and winds through Chittagong, Patna, Lucknow, Delhi and Jullundur before its final stop.

All aboard Shuttlecock Inc’s Great Indian Peninsula Railway — a £65 per head pop-up dinner experience for Londoners that will take 40 guests on a seven-course culinary journey from Rangoon to Srinagar. As the name suggests, a pop-up restaurant is just one that pops up. No permanent space is needed, just a venue the organisers will rent for a few days. Some pop-ups last only a day while others can run for a short period, like this one, The Great Indian Peninsula Railway, from July 18 to August 10.

In fact Shuttlecock Inc was created specifically for this form of entertainment, bringing together art, music, theatre and food in a series of pop-up events in London.

So what inspires a group of Londoners to bring India to the heart of their city?

It started with the Sunday blues. Four cousins, driving back to their hometown of London after a vacation in France, found themselves wishing they didn’t have to return to their jobs on Monday. What would happen, they mused, if they worked with each other?

And so the Templetons — Anna (31), Ed (29), Will (27) and Oliver aka Olly (the baby, at 22) — looked to their roots for inspiration. “We’re from a pretty big family,” explains Ed. “And every family occasion revolves around a meal.” The cousins decided to combine their love of food and travel to form Shuttlecock Inc last year, creating the perfect evening out for Londoners looking to shake up their dinner plans. “We wanted to host something like our family get-togethers, where you dance, have great conversations and have a great meal,” says Ed.

For their first pop-up event in March, the group was inspired by the golden age of travel during the 1950s — no plastic cutlery, no pat-downs and plenty of legroom. For Shuttlecock’s first ‘Mile High’ event, a bevy of Pan-Am-inspired stewardesses welcomed their ‘passengers’ for the evening into a departure lounge (a disused Royal Mail sorting office that had been transformed by a set-designer) and presented them with a passport and boarding ticket to their destination of Gothenburg, Sweden. Once on the ‘plane’ (two long tables where diners sat side-by-side), the passengers feasted on a meal featuring pan-fried scallops, chargrilled elk, lingonberry ice cream and crayfish while raucously singing Swedish drinking songs. Subsequent Mile High events whizzed through Beirut (featuring smoked labneh with sour cherries, rose water and grape jelly with cardamom custard) and Sicily (swordfish in orange and cinnamon with fennel and pine nuts, burnt peach gelato, pistachio praline and amaretti biscotti).

Their latest venture is inspired by numerous trips to India. “A few years ago, I did a journey across India in a tuk-tuk,” Ed recounts. “I covered 4,000 kilometres in that rickety old thing, starting in Meghalaya in the north east and ending in Jaisalmer in Rajasthan.” This project is very much a work of love, a family affair — walk into the dining room where his grandfather’s old trunks perch in the train’s berths, you’ll see Will polishing cutlery. Painted signs (‘Avoid: sleeping near the windows wearing heavy jewels, friendship with strangers’) replicate the highlights of the cousins’ travels in India (there’s no paan ki peek to be found here, though) and on the first night, an assistant-less Olly frantically chopped vegetables with both hands to prep a meal for forty people.

It’s easy to lose yourself in the fantasy, in this haze of incense and Mohammad Rafi songs. A white-turbaned coolie darts between the crowd, offering a glass of paani here, practicing his English there — “Ali is our odd jobs man,” the ticket inspector (who goes by the name Quentin Raamsbottom, ‘a babu’s name that he has stolen’) says, “he makes many jobs even.” He adds, snickering, “but be careful, because he sometimes checks out the train’s undercarriage, if you know what I mean.” This crew of ten actors has worked with Shuttlecock on previous events and they have their routine down pat — when I tell Lakshmi, a woman from the pink city of Jaipur, that I’m covering the event, she deadpans, “what event?”

Thus, the key element, ultimately, is the attempt to be authentic. The event does not rest on a colonial imagination of India alone. Harini, a dinner guest from south India who came to the event with her daughter, loves the attention to detail and the atmosphere, which “is very reminiscent of [her] time in India”. And while the food is central to the experience, not everyone is there for the feast. Lily, for instance, who surprised her date with tickets to the event, admits that while she is not a “massive fan of Indian food,” she decided to come for the novelty of the experience.

Each ‘stop’ of the train’s route explores a different flavour and the menu includes everything from sea bass and scallop broth (Chittagong) to a vegetarian thaali (Patna). The idea is to serve a taster menu that encourages people to try food they might otherwise be hesitant to order at one of London’s thousands of curry houses. “This is an interpretation of Indian cuisine,” Ed clarifies. “We’re not expecting anyone to say, ‘This is exactly how my mum would make it.’” Olly, who has the enviable experience of being a chef at the award-winning Moro at his young age, takes inspiration from restaurants he loves — “We’ve been doing research for this project at Tayyabs in Whitechapel for nearly 7 years,” Ed quips — but tweaks dishes in order to offer something fresh for Londoners who are able to roll ‘daal makhni’ off their tongues effortlessly.

Their appetites whetted by an hour of cocktails in the train’s waiting room, the train’s ‘passengers’ are summoned by the ticket collector’s whistle to board. Their ticket stubs punched, they enter the carriage and squeeze in next to complete strangers in a series of berths (repurposed church pews).

“We’ve had a lot of people at our other events who meet for the first time at one of our pop-ups and then come back together for subsequent ones,” Will says. And in a city where you apologise profusely for so much as brushing against someone on the train, you can find yourself sharing the contents of your thaali with someone you met only ten minutes ago.

Two waiters in shalwar kameez serve up plates of salad with slivers of tart unripe mango or kayri, tea leaves and crunchy peanuts, the perfect opener for the next course, a bowl of sea bass and scallop broth tinged with lemongrass and coconut.

When the train ‘reaches’ Delhi, Olly serves up a plate of melt-in-your-mouth creamy pan-fried chicken kaleji, seasoned with cardamom and chili. At this point, five courses in, the room is getting warm, the diners’ faces are flushed as they are served lamb and pea samosas in a buttery puff pastry, garnished with cool mint raita. As we head to Srinagar, it is a relief to be presented with chilled cups of cherry cake with yoghurt, garnished with pistachios and plump cherries. An impromptu game of cricket starts in the aisles with a green lime serving as a ball. The passengers join in with a crescendo of whoops and table-thumping.

Their attentions focused on the game, the guests scarcely notice the theft of Laskhmi’s jewels. Quentin grabs Ali by the scruff of his neck, accusing him of pocketing the gems. A lady in red silk who has entered the train carriage unnoticed cries out, “No! He is not a thief! He is my husband,” and we’re suddenly in the middle of a Bollywood-inspired flash dance in the aisles. The passengers, giddy by this point, join in the dancing.

“The whole point of what we’re doing,” Ed says, “is that you walk through the doors into a completely different world — it’s a story that you’re part of and you get to let go for a few hours.”

As the night comes to an end, we walk out of the train’s waiting room and step out into a cool London evening. Ali, now in a Guns N’ Roses T-shirt and jeans, is heading home for the night. The passage through India has ended.