"This was never a fair trial," Assang­e saiys from inside the Ecuado­rean Embass­y in London.
By Reuters
Published: July 31, 2013
Tweet Email 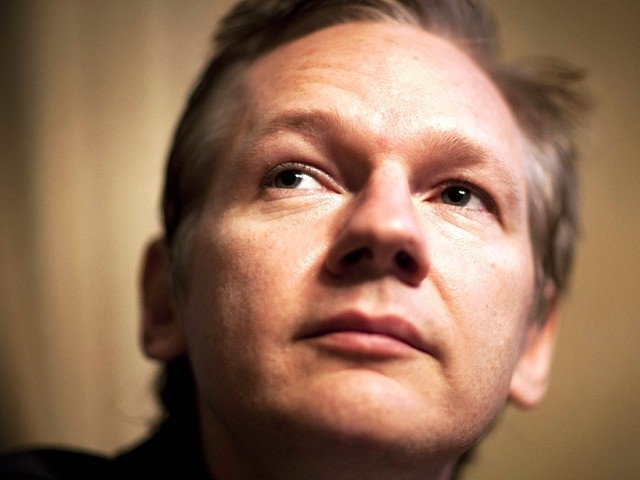 Assange said WikiLeaks and Manning's own legal team would not rest until the judgement was overturned. PHOTO: REUTERS/FILE

Praising Manning as “the most important journalistic source that the world has ever seen”, Assange said the US soldier, who prosecutors said had supplied WikiLeaks with hundreds of thousands of classified US documents, did not receive a fair trial and called for the verdict to be overturned.

“The government kept Bradley Manning in a cage, stripped him naked and isolated him in order to break him, an act formally condemned by the United Nations Special Rapporteur for torture.

“This was never a fair trial,” Assange said from inside the Ecuadorean Embassy in London, his home for more than a year.

Assange said WikiLeaks and Manning’s own legal team would not rest until the judgement was overturned.

“It is a dangerous precedent and an example of national security extremism. It is a short-sighted judgment that cannot be tolerated and it must be reversed.”

Assange did not confirm or deny whether Manning had in fact supplied WikiLeaks with classified documents, always using the word “alleged” when talking about the leak. WikiLeaks did not reveal its sources, he said, and always protected them.

Manning’s conviction on five espionage and 14 other charges poses a potential problem for Assange since the severity of the judgment, which carries a jail sentence of up to 136 years, might deter would-be whistleblowers, the lifeblood of Assange’s organisation.

It is also a reminder of his own fate. Wanted in Sweden on sexual abuse allegations he denies, Assange has sought sanctuary in the Ecuadorean Embassy in London because he fears he would be extradited to the United States to face trial over his own alleged role in the leak case if he agreed to go to Sweden.

Manning’s is one of two high-profile leak cases involving Americans. Former US intelligence contractor Edward Snowden has been holed up at a Moscow airport for more than a month, despite US calls for Russian authorities to turn him over.

Dressed in a dark suit, Assange said Obama had initiated more espionage proceedings cases against whistleblowers and publishers than all previous US presidents combined and had made a mockery of his own words in the process.

“In 2008, the then presidential candidate Barack Obama ran on a platform that praised whistleblowing as an act of courage and patriotism. That platform has by Barack Obama’s actions been comprehensively betrayed,” said Assange.

Assange had nothing but praise for Manning, holding up his behaviour as a model of how to be a whistleblower.

“His actions as alleged are unquestionably heroic. He in that sense is an example for others to follow.”