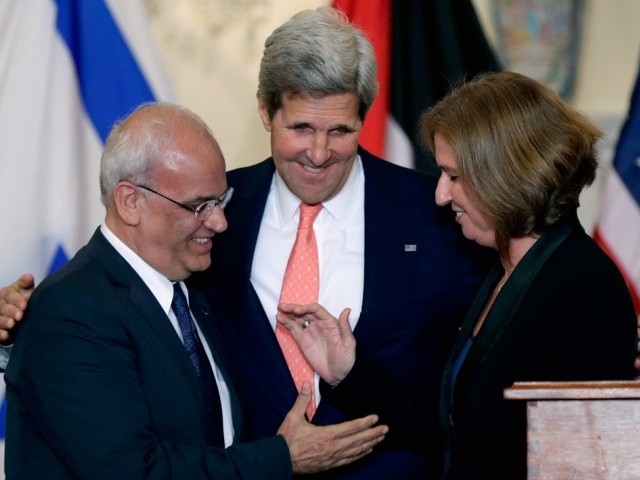 WASHINGTON DC: Israeli and Palestinian negotiators agreed Tuesday to meet again within the next two weeks, aiming to seal a final peace deal in nine months, US Secretary of State John Kerry said.

The two sides will meet in either Israel or the Palestinian territories and “our objective will be” to reach a “final status agreement over the course of the next nine months,” Kerry told reporters after Israelis and Palestinians ended a three-year freeze on talks.

After a morning of talks at the White House with President Barack Obama and at the State Department, the two sides had agreed that all the most contentious issues such as borders and refugees and the fate of Jerusalem would be on the table for discussion.

“The parties have agreed to remain engaged in sustained, continuous and substantive negotiations on the core issues,” Kerry said, flanked by Israeli chief negotiator Tzipi Livni and her Palestinian counterpart Saeb Erakat.

“They will meet within the next two weeks in either Israel or the Palestinian Territories in order to begin the process of formal negotiation.

“The parties have agreed here today that all of the final status issues, all of the core issues and all other issues are all on the table for negotiation,” Kerry insisted.

“And they are on the table with one simple goal: a view to ending the conflict, ending the claims. Our objective will be to achieve a final status agreement over the course of the next nine months.”

The top US diplomat also reiterated his view that time is running out for a two-state solution, insisting “there is no other alternative.

“We all need to be strong in our belief in the possibility of peace, courageous enough to follow through in our faith in it, and audacious enough to achieve what these two peoples have so long aspired to and deserve,” he said.

Erakat praised Kerry’s dogged efforts to resume the talks, stalled for three years, saying “no one benefits more from the success of this endeavor than Palestinians.

“I’m delighted all issues are on the table and will be resolved without any exceptions. It’s time for the Palestinian people to have an independent sovereign state of their own.”

And Livni said she hoped that a “spark of hope” would emerge from the new talks.

“It is our task to work together so that we can transform that spark of hope into something real and lasting,” she said.

“I believe that history is not made by cynics. It is made by realists who are not afraid to dream. And let us be these people.”

Wikileaks: Manning guilty of espionage but not ‘aiding enemy’