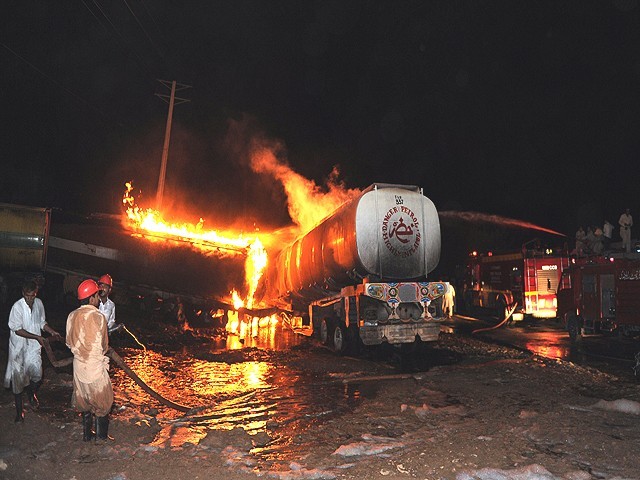 Pakistani firefighters try to extinguish burning Nato supplies oil tankers following the gunmen attack on the outside of Islamabad on October 4, 2010. PHOTO: AFP

ISLAMABAD: Pakistani Taliban on Monday claimed responsibility for two attacks on Nato supply convoys in Pakistan and threatened to carry out more.

“We accept responsibility for the attacks on the Nato supply trucks and tankers,” Tehreek-e-Taliban Pakistan (TTP) spokesman Azam Tariq told AFP. “I am talking about attacks both in Sindh and in Islamabad,” he said in a telephone call from an undisclosed location.

“We will carry out more such attacks in future. We will not allow the use of Pakistani soil as a supply route for Nato troops based in Afghanistan.

“This is also to avenge drone attacks,” he added.

Acting SSP Mir Waiz says six of the nine attackers have been arrested, while  a search operation is underway for the arrest of others.

Islamabad Police have also recovered four motorbikes it believes were used in the attack.

Meanwhile, Interior Minister Rehman Malik ordered an inquiry into the event and asked the Islamabad IG to submit a report within 24 hours.

The attack came as Pakistani authorities continued their own blockade of a main land route for Nato supplies for a fifth consecutive day, in response to a Nato helicopter strike that Islamabad says killed three of its soldiers.

Television pictures showed flames towering from the trucks. The trucks were being filled just outside Islamabad en route to Afghanistan early in the morning when gunmen attacked the convoy with molotov cocktails.

Meanwhile, Interior Minister Rehman Malik ordered an inquiry into the event and asked the Islamabad IG to submit a report within 24 hours.

At least 11 oil tankers carrying supplies for Nato forces stationed in Afghanistan were gutted and four people were killed when gunmen mounted a late night attack on a filling station in Islamabad.

More than 25 oil tankers stopped for refuelling near the Defence Housing Authority (DHA), Phase-II and Jadah Town on the outskirts of the city when they were attacked by at least eight gunmen, police said. Nine tankers parked at the head of a long queue caught fire, added sources in Rescue 1122.

Rescuers and fire tenders from Rawalpindi and Islamabad rushed to the site to put out the fire. Rescuers said that they recovered four charred bodies from the burning oil tankers. Another six persons were rescued with burn injuries. They were ferried to hospital where two of them were said to be in critical condition. Most of the dead and injured were drivers and cleaners of the vehicles.

“It was a terrorist attack. The gunmen first opened fire and then set the oil tankers on fire,” police official Malik Umer Hayat told The Express Tribune. “More than five tankers were destroyed. Efforts are under way to douse the fire on another five to six oil tankers,” he added.

Hayat put the number of dead at four, with another five injured. Fire-fighters were trying to extinguish the fire that was still burning till the filing of this report. Some of the tankers were removed from the place to prevent the fire from spreading.

Mingora bench: so close, yet so far away