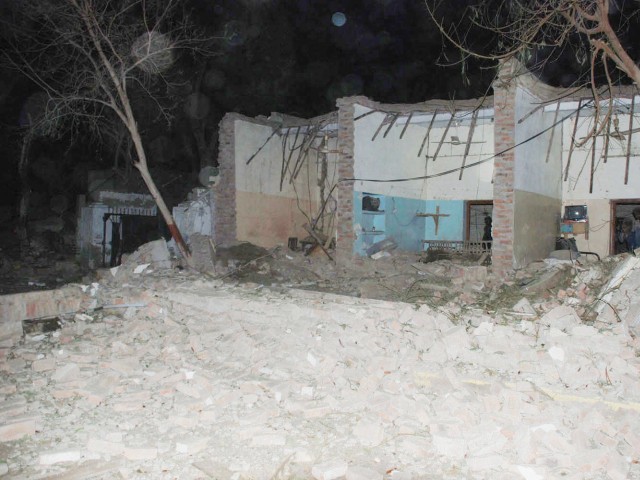 The first blast occurred when militants reportedly rammed an explosive-laden truck into one of the houses. PHOTO: EXPRESS/NAEEM AHMED GHOURI

Up to five gunmen were believed to have attacked the heavily guarded compound and detonated four bombs, said Masood Bangash, the deputy superintendent of police in Sukkur.

He said the local offices of the Inter-Services Intelligence, the Pakistani military’s spy agency, seemed to be the main target.

Initial reports suggest that the first blast, which was reportedly the biggest, occurred when militants had an explosive-laden truck crash into one of the houses. The force of the explosion was felt throughout the area, and caused the houses to partially collapse.

The militants then attacked with hand grenades and small arms at the houses leading to successive explosions.

Assistant Superintendent of Police City said that 30 kilograms of explosives were used in the attacks.

The area also houses an Imam Bargah, the Commissioner House, lodges for High Court judges and the Rangers’ headquarters.

He added that the security forces killed at least three suspected militants.

“Of those who were killed, only one was a civilian,” said Odho. Two ranger’s personnel were also killed.

“The subsequent blasts occurred as people were moving towards the site of the explosion after the first blast,” reported Express News correspondent Sajjad Ali Shah.

Radio Pakistan claimed that one of the militants was arrested, though officials did not confirm this.

The roof of the houses in the area, including the DIG house collapsed due to the intensity of the blast.

The people who were trapped under the rubble were shifted to the hospital by rescue teams.

Heavy contingents of police and rangers reached the blast site, but they could not reach the DIG House immediately because of the repeated explosions.

Two of the deceased were identified as Ahsan Malik and am intelligence official Muhammad Azeez, who were shifted to the hospital.

@beenasarwar @Kamrankhan27 @ShamaJunejo its my neighborhood. Six blasts followed by extensive firing. Never thought this can happen in #Suk

@ShamaJunejo first blast was huge. My home windows shattered. It is heard throughout the city.

The militants had forced their way into one of the offices.

As a result, the security officials surrounded the area and carried out an operation.

Officials later revealed that at least the five suspected militants had been killed, three were shot dead, while two had carried out suicide bombings, a Rangers spokespersons said.

The local residents moved out of the area following the blasts.

Dancing away from Lahore to Turkey