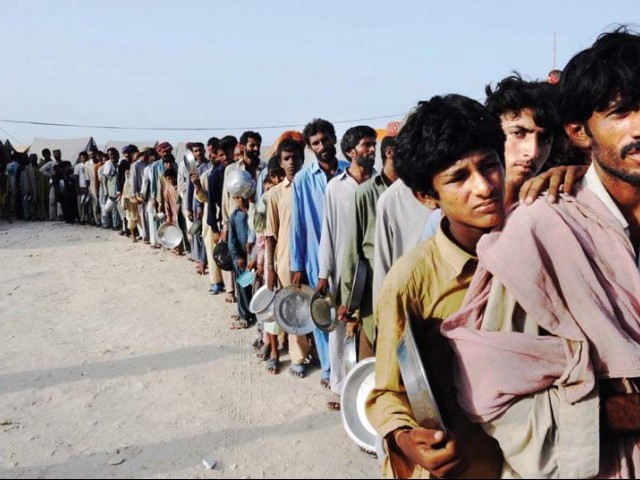 SARGODHA/DG KHAN: Flood victims from all over Southern Punjab have complained about nepotism and corruption regarding the distribution of ‘Watan Cards’ in their respective districts.

In Zahir Pir, Kotla Pathan flood victims said that survey teams only audit a village if the official is bribed. On Friday, survey teams consisting of local patwaris allegedly demanded a bribe of over Rs50,000 from villagers in Much Bund. “They told us that they wouldn’t even bother to conduct the survey without getting the money first and we knew that we wouldn’t get Watan Cards any other way,” said villager Mohammad Kashif. When the flood victims refused the patwari refused to include the names of over 40 people in the watan cards list. A young man, Azam then beat up the patwari Khaeeq Anwar.

The incident took place on Saturday after a team of patwaris reached Mud Adil, Ahmed Kudan and Simka to enlist flood victims for watan cards. The patwari of the area, Anwar, visited the village to write down the losses of the Ghalija clan in village Simkai and sought a bribe of Rs10,000. Allah Bukhsh refused the bribe and the patwari then refused to enlist his losses and threatened to lodge a case against him. “He told several other villagers that he wouldn’t register them without money,” Buksh said.

Villagers in the area then gathered and beat up the patwari, removed his clothes and dragged him through the streets. “We found him lying unconscious and naked in a ditch in Munchan Bund,” said inspector Munawwar. Other patwaris reached the scene and took Anwar to the Zahirabad police station and lodged a case against Bukhsh and his family. Following this, hundreds of people gathered and protested against the administration outside the police station. The protesters burnt tyres and the patwaris and tehsildars tried to lodge cases against the villagers and 11 reporters.  The district coordination officer (DCO) has jailed the patwari, girdawar, school teacher, agriculture department officials and numberdar in this regard. According to locals, nearly 50 per cent of the names on the patwari’s registration list include his relatives and friends who have been nominated for watan cards.According to flood victims, local landlords had employed the same patwari against Khosa, Dada, Simkai and Thakna clans where flood victims were being charged money in exchange for watan cards.

Meanwhile, in Sargodha, people from three villages protested against the local administration for failing to include their names in the flood survey by the Punjab government. Sargodha’s village Sabuwal residents Muhammad Fayaz, Ahmed Khan, Muhammad Ramzan, Haji Ahmed, Manzoor Hussain and others blocked Sargodha Katchery road and said that the floods had destroyed their houses and that their animals had been killed but they had not been compensated.

“Despite the damage the government has not declared this area to have been affected by floods and no relief package has been announced yet,” said Muhammad Fayaz. Villagers said that there were several areas in Sargodha which were not affected like Kot Momin and Chowki Bhagat but aid was being distributed there because the survey officials had relatives in the area.

Locals demanded that the government conduct a survey in Sabuwal, Bonga Balochan and Nizamabad and write off their agricultural loans.

In DG Khan, thousands of flood affected people protested outside the DCO’s office because they had not received aid. According to locals, the DCO office conducted a false survey. They said that even though the administration had spent days making villagers wait in the sun with boards around their necks to mark their number in line they had still not been registered. So far Beat Wala, Moza Ladan residents have not been provided aid.