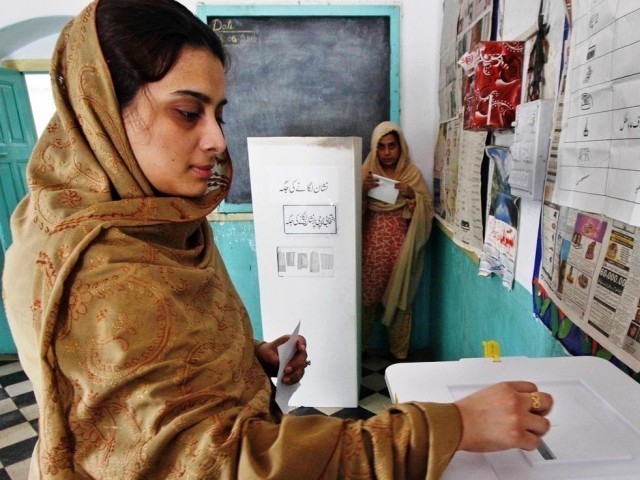 Only women allowed to vote for female candidates in the local body elections of Khyber Pukhtunkhwa.

PESHAWAR: The Khyber Pukhtunkhwa government has begun to prepare a draft constitution for the next municipal elections which will allow female candidates to be elected exclusively through female votes, reports Express News.

The provincial government is also considering the officiating of youth counselors as a way of facilitating the representation of youth.

Despite the traditional hurdles discouraging women to vote, the province of Khyber Pukhtunkhwa registered a particularly enthusiastic female turnout in this year’s general elections.

However, poor organisation, social taboos and Taliban proved to be some of the barriers preventing women from a wider participation in many areas during the May votes.

In some areas, like Upper Dir and other parts of the province, the ballot box did not yield even a single female vote, either because of threats or due to informal agreements between political parties disallowing women participation. There were also reports of a deal in some tribal areas where it was decided not to let women vote.

Nevertheless, women voters in Peshawar, Mardan and other areas turned out in thousands. The Pakistan Tehreek-e-Insaf, which emerged victorious by a large margin in the province, is said to owe a good share of its success to youth and especially to women.

A month before the elections of May 11, the government had already warned of imprisoning anyone who barred women from voting.