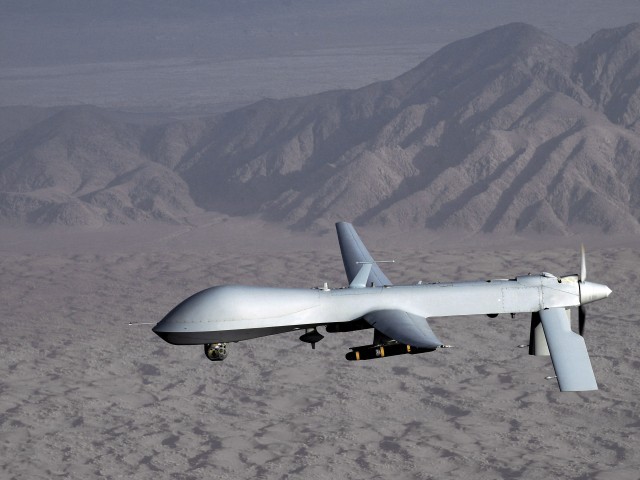 US military diverting drones from Afghanistan for CIA-led campaign.

WASHINGTON: The United States’ military is secretly diverting aerial drones from Afghanistan to escalate a CIA-led campaign against militants in Pakistan, the Wall Street Journal reported on Saturday.

The US military has lent Predator and Reaper drones to the Central Intelligence Agency’s operatives to target and bomb militants on the Afghan border, the report said, citing unnamed US officials.

Increased strikes in September were partially aimed at disrupting a suspected terror plot against European targets, which was believed to target multiple countries, including Britain, France and Germany.

Unnamed US officials told the paper that a successful terrorist strike against the West coming from Pakistan could result in US forces taking unilateral military action.

According to the Journal, factories cannot produce aerial drones fast enough to satisfy the increased demands of the Pentagon and the CIA.

Pakistani officials have reported that at least 21 US drone attacks have killed around 120 people in September, the highest monthly tally of attacks.

The overwhelming majority of the attacks took place in North Waziristan, which is considered to be a bastion of al Qaeda-linked and Taliban commanders opposed to the US-led war in Afghanistan.

Most of the strikes have targeted the Haqqani network, one of the strongest US foes in Afghanistan whose leadership is based in North Waziristan. But local tribesmen claimed the US missiles were killing civilians. Washington has classified Pakistan’s tribal belt on the Afghan border as a global headquarters of al Qaeda.

A covert US drone war in Pakistan has killed around 1,140 people in about 140 strikes since August 2008, including a number of senior militants, but the attacks have been fuelling anti-American sentiments in Pakistan.

‘Sikhs feel more abandoned now than during the dictator’s regime’