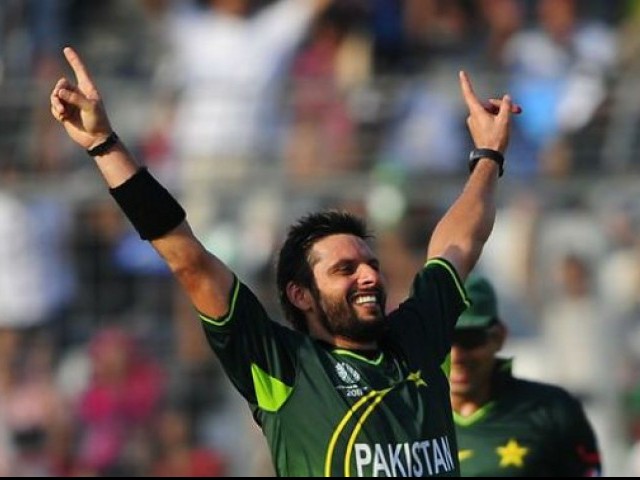 Afridi was declared Man of the match for his splendind performance. PHOTO: AFP/FILE

West Indies, chasing 225 to win, were bowled out for 98 with nine overs remaining.

Shahid Afridi was declared as Man of the Match for his magnificent performance. Afridi took seven wickets for just twelve runs, and scored 76 off 55 balls.

Earlier Afridi and Misbah-ul-Haq rescued Pakistan from a perilous position as they reached 224 for nine against the West Indies in the first one-day international at the Guyana National Stadium on Sunday.

Returning to the team after being omitted from the Champions Trophy in England in June, the mercurial Afridi smashed a top score of 76 off 55 deliveries while Misbah redefined the role of the cautious captain, occupying 121 balls for his watchful innings of 52.

The pair put on 120 for the sixth wicket, a new record in one-day internationals for the ground and the best for Pakistan against the West Indies.

Their effort was essential after Jason Holder wrecked Pakistan’s top-order batting in finishing with the outstanding figures of four for 13 off 10 overs.

The beanpole pacer, in just his fourth one-dayer, proved almost unplayable in overcast, seamer-friendly conditions with an exhibition of pace and accuracy that belied his relative inexperience.

Holder wasted little time in getting among the wickets after light morning delayed the start by 15 minutes.

Ahmed Shehzad played-on in the Barbadian’s second over while the experienced Mohammad Hafeez was a prized scalp, his off-stump sent cartwheeling when he opted not to offer a shot.

Holder was then fortunate to have an lbw appeal against the other opener, Nasir Jamshed, upheld and then removed Asad Shafiq first ball to a brilliant catch by wicketkeeper Johnson Charles.

He should have claimed a fifth wicket but what looked like an obvious edge to Charles off Umar Akmal was ruled not out by umpire Joel Wilson, the same official who ruled Jamshed leg-before.

Afridi wasted no time setting about the bowling, hoisting six fours and five sixes in a typically entertaining innings while at the other end, Misbah was content to support the rampant all-rounder by feeding him the strike at every opportunity.

Afridi eventually fell to a catch at deep midwicket off Kieron Pollard in the 39th over.

West Indies did not help their cause with a repetition of the bowling indiscretions which surfaced during the Tri-Nations series last week where visiting India and Sri Lanka beat them to the final.

They delivered some 23 wides and gifted a total of 28 extras to the Pakistani total. Given the potential potency of the Pakistani bowling attack, it may prove to be a carelessness they could ill afford.

The second match of the five-game series takes place at the same venue on Tuesday.

Correction: In an earlier version of this article, Misbah’s final score was mentioned as 42 instead of 52. The error has been fixed.