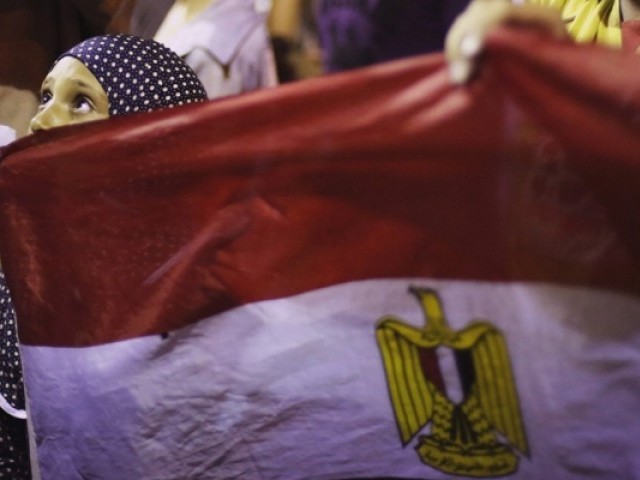 A girl holds Egypt's flag as she attends a sit-in protest organized by supporters of the deposed Egyptian President Mohamed Mursi in Cairo July 11, 2013. PHOTO: REUTERS

CAIRO: Supporters and opponents of ousted Egyptian president Mohamed Morsi have called rival rallies for the first Friday of Ramadan, amid soaring tensions following the military’s overthrow of the leader.

The Muslim Brotherhood, the influential group from which Morsi emerged, has vowed to keep protesting until he is reinstated.

The group “will continue in our peaceful protest until the fall of the military coup and the return of legitimacy,” Brotherhood spokesman Ahmed Aref said.

Separate rallies have been organised across Cairo, but the group’s ability to mobilise remains in question with much of its leadership detained, on the run or keeping a low profile.

The anti-Morsi camp has also called for rallies, including a mass iftar — the breaking of the Muslim fast — in Tahrir Square.

The military’s overthrow of Morsi last week after millions took to the streets demanding his resignation has sparked deadly clashes and deepened divisions in the Arab world’s most populous country.

Egypt’s new premier said on Thursday he does not rule out Muslim Brotherhood members in his cabinet, even as the group vowed to keep defying the coup.

Hazem al-Beblawi, who was appointed on Tuesday, told AFP in a telephone interview he was still considering the makeup of his interim government.

“I don’t look at political association… If someone is named from (the Brotherhood’s) Freedom and Justice Party, if he is qualified for the post” he may be considered, Beblawi said.

“I’m taking two criteria for the next government. Efficiency and credibility,” he added.

Beblawi said he wanted to decide on the best candidates before asking them to join the government.

The Brotherhood has already rejected a Beblawi offer to join the new government, and called a mass rally for Friday against what it called “a bloody military coup”.

Meanwhile, the United States said it was pressing ahead with plans to deliver four F-16 fighters to Egypt, a US official said.

There was no decision to halt the scheduled transfer of the warplanes or to cut off other security assistance to Egypt, the official said on condition of anonymity, even though Washington has announced a review of all aid to Cairo.

President Barack Obama’s administration has said it is examining whether the military takeover constitutes a coup, which under US law would force Washington to freeze any aid to Egypt.

In Cairo, the bloody run-up to Ramadan has marred the onset of the holy month.

“This year there is not the usual feeling of happiness. We are worried,” said Fawziya, as she shopped in a market.

Police were hunting the Brotherhood’s Supreme Guide, Mohammed Badie, after a warrant was issued for his arrest on Wednesday.

Badie and other senior Brotherhood leaders are wanted on suspicion of inciting the clashes.

Last week Badie gave a fiery speech in which he vowed that Brotherhood activists would throng the streets in their millions until Morsi’s presidency was restored.

Morsi himself is currently being held in a “safe place, for his safety,” foreign ministry spokesman Badr Abdelatty told reporters on Wednesday, adding: “He is not charged with anything up till now.”

Military and judicial sources have said the ousted leader may face charges eventually.

UN leader Ban Ki-moon raised concerns about the detention of Morsi and other Muslim Brotherhood leaders with the country’s foreign minister, a spokesman said.

Ban reaffirmed that there must be no “retribution” against any party, UN spokesman Martin Nesirky told reporters after the telephone talks between Ban and Foreign Minister Mohammed Kamal Amr.

Morsi’s overthrow after nationwide protests demanding his resignation plunged Egypt into a vortex of violence.

The Brotherhood accuses the army of “massacring” its supporters in Monday’s incident, and the army says soldiers were attacked by “terrorists” and armed protesters.

The public prosecutor pressed charges on Wednesday against 200 of 650 people detained during the violence.

In the restive Sinai peninsula, a Coptic Christian man was found decapitated on Thursday five days after gunmen kidnapped him, security officials and witnesses told AFP.

Adly Mansour, the military-appointed caretaker president, has set a timetable for elections by early next year.

But opponents and supporters of Morsi alike have criticised the interim charter he issued on Monday to replace the Islamist-drafted constitution and to steer a transition the army has itself acknowledged will be “difficult”.

Many fear a repetition of the mistakes of the last military-led transition, between Hosni Mubarak’s ouster in 2011 and Morsi’s election in June 2012.