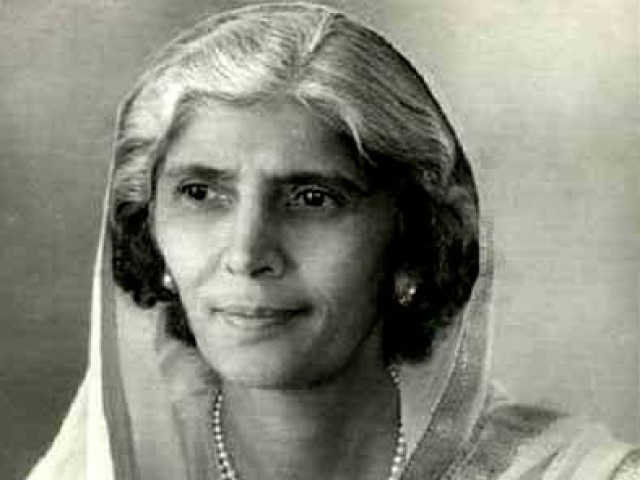 KARACHI: We, as a nation, have forgotten our leaders and it is apparent in the fact that the death anniversary of Fatima Jinnah passed by silently even though this is the government of the Pakistan Muslim League.

We have been calling her ‘Madar-e-Millat’, the first female politician who challenged the military dictator, late Ayub Khan. Yet, none of the champions of democracy paid homage to her on her death anniversary.

Fatima Jinnah, was not an ordinary woman. She was not only the sister of Quaid-e-Azam and fought shoulder to shoulder with him but, in her own right, she became the majority-backed candidate of opposition against Ayub Khan in the presidential elections. Even those religious parties, who were ideologically against the leadership of a woman, accepted her as their leader. She became the symbol of resistance but she no longer inspires or warrants a visit by our present leaders.

Sadly, she is not the only leader we have forgotten. If you pore over the visitors’ book at Quaid-e-Azam’s mausoleum, or the mausoleums belonging to Liaquat Ali Khan and Allama Iqbal, you will be surprised to learn that our present leaders hardly visit them. Sometime ago, these leaders were remembered on their birth and death anniversaries but now we hardly deem them important enough. It is no more in the government protocol to visit the mazaar after oath-taking.

Prime Minister Nawaz Sharif, the chief of PML – a party they claim is connected to the one formed in 1906 has yet to visit the mazaar since he became the premier for the third time. The prime minister recently made a trip to China but a visit to the founding father is still not on his schedule.

Even when he visited Quetta to preside over a law and order meeting, Sharif failed to pay a visit to the Quaid’s house in Ziarat that was destroyed by militants. Security is certainly important but is it more important than national pride?

The president is not far behind. How many times in the last five years has he paid a visit to the mazaar? The mausoleum’s visitors’ book presents a sorry picture. When Sindh chief minister Qaim Ali Shah forgot to visit the mausoleum after his oath-taking and instead went to a party reception in Lyari, he also faced a lot of criticism.

If the leaders have failed to hold the mausoleums or the leaders it represents on a pedestal, the sanctity of Quaid’s mazaar has also been destroyed by the people, as it has become a den for drugs addicts and prostitutes.

Next month, Pakistan will be celebrating its 66th birth anniversary or independence. Surely, our leaders will visit the mausoleum and there will be a special ceremony of the change of guards on August 14.

When some of these leaders make additions in the visitors’ book, it would be worth noting how may times a year these forgotten leaders are remembered.