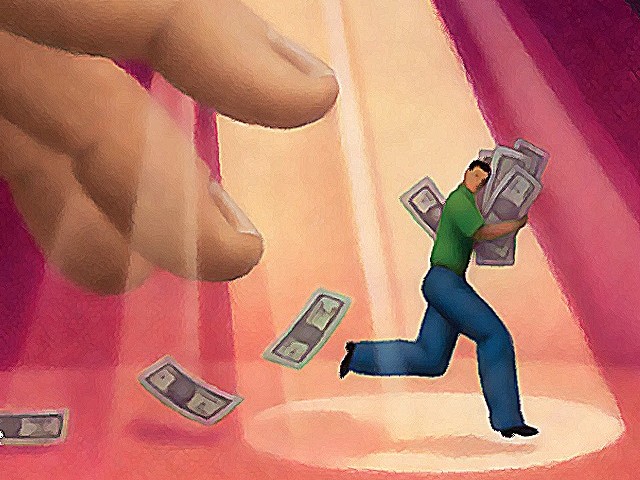 Of the 1,000 respondents, 86% believe the police and public officials were corrupt. PHOTO: FILE

KARACHI: According to a public opinion poll by Transparency International (TI) released on Tuesday, corrupt practices, especially among the police and government departments, are perceived to be on the rise in Pakistan.

The survey by Transparency International, a global non-governmental body which studies bribery and corrupt practices around the world, categorised different sectors of the Pakistani society including the police, public officials, political parties, the parliament, medical and health services, the judiciary, the education system, business and private sectors, non-governmental organizations (NGOs), the media, military and religious groups over their involvement in corrupt practices.

The survey with 1,000 respondents showed that the police department and public officials were the most corrupt with 86 per cent, followed by political parties with 84 per cent, the parliament with 76 per cent, medical services and judiciary with 66 per cent, the education system with 64 per cent and and the NGOs with 62 per cent.

Religious groups were found to be least corrupt with 54 per cent, followed by the military and the media.

The survey also revealed that the most Pakistanis paid bribes when they came into contact with the land services department. Police was second in taking bribes with 65 per cent, the judicial system with 36 per cent, and the education department with 16 per cent.

Results show that 54 per cent of the respondents said that corruption had increased by a large margin in the country, while 18 per cent believed that it had increased a little.

It also indicated a dangerous trend in interactions with the public sector, with almost 96 per cent of the respondents saying that personal contacts were important for getting things done in the public sector.

The results further indicate that both men and women equally (96 per cent and 95 per cent) felt that personal contacts were necessary to get things done in the public sector.

The survey showed 59 per cent of Pakistanis were willing to pay more to buy goods from a company that was clean and non-corrupt.

Speaking during a press conference at the Karachi Press Club, Chairman TI Pakistan Sohail Muzaffar stressed upon the government to address corruption with an iron hand as the economic condition of Pakistan was at its lowest due to the rampant corruption in the country.

Muzaffar said that according to the Corruption Perception Index (CPI) of 2012, Pakistan was at number 34 out of 180 in the list of most corrupt nations.

Adviser TI Pakistan Syed Adil Gillani said that he expects the Pakistan Muslim League-Nawaz government to adhere to the promises made in their election manifesto of zero tolerance to corruption in Pakistan.

Corruption on the rise globally

More than half of respondents in a global corruption survey released Tuesday think that graft has worsened over the past two years, and a quarter reported having paid officials a bribe in the last 12 months.

The survey by Berlin-based non-profit group Transparency International also found that people have least trust in institutions meant to help or protect them, including police, the courts and political parties.

Respondents also believed official anti-corruption efforts had deteriorated since the 2008 start of the world financial and economic crisis.

The group’s Global Corruption Barometer 2013 is the world’s largest public opinion survey on corruption. It surveyed 114,000 people in 107 countries, the group said.

It found that 27 per cent of respondents had said they had paid a bribe to a member of a public service or institution in the past 12 months, revealing no improvement from previous surveys.

The group pointed to a link between poverty and graft. Eight of the 10 countries with the highest bribery rates are African, said a Transparency spokesperson.

People’s appraisal of government efforts to stop corruption was worse than before the financial crisis began in 2008, falling to 22 percent now from 31 per cent then.

Still, the group said that there was a growing will to fight back, with two-thirds of those who were asked to pay a bribe saying they had refused.

“Bribe paying levels remain very high worldwide, but people believe they have the power to stop corruption and the number of those willing to combat the abuse of power, secret dealings and bribery is significant,” said Huguette Labelle, chair of Transparency International.

She added that “governments need to make sure that there are strong, independent and well-resourced institutions to prevent and redress corruption. Too many people are harmed when these core institutions and basic services are undermined by the scourge of corruption.”