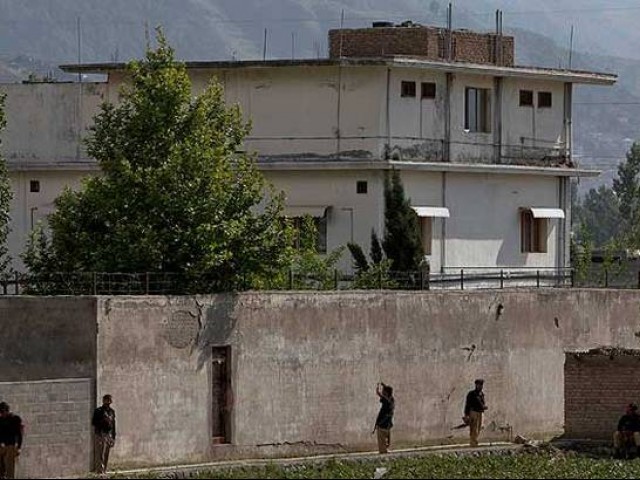 The commission had investigated around 46 questions from several dozens of officials and civilians to compile a comprehensive report on the incident. PHOTO: AFP/ FILE

ISLAMABAD: Without naming anyone, the Abbottabad Commission investigating the circumstances surrounding the Osama bin Laden raid said in its report that the country’s civil and military leadership should apologise to the nation for their “collective failure”.

The report was leaked to Al Jazeera news network and posted on its website on Monday.

The commission, however, has not named individuals or suggested punishment for those who were ignorant about the presence of the al Qaeda leader or the US raid in Abbottabad to kill Bin Laden on May 2, 2011.

“It is unnecessary to specifically name them because it is obvious who they are,” said the report.

The report says, “It may be politically unrealistic to suggest ‘punishments’ for them. But as honourable men, they ought to do the honourable thing, including submitting a formal apology to the nation for their dereliction.”

The report also faulted “low level officials” who “failed to discharge their duties professionally and dutifully, and for which they deserve to be reprimanded. But finally, no honest assessment of the situation can escape the conclusion that those individuals who wielded primary authority and influence in the national decision making bear the primary responsibility for creating the national  circumstances and environment in which the May 2, 2011 incident occurred.”

Former interior minister Rehman Malik’s testimony has been recorded in the commission saying that the al Qaeda fugitive eluded notice due to collective intelligence failure. “It was the cumulative result of many interwoven issues. Low level administrative and security officials like the patwari, constable, SHO, revenue department and other agencies had failed to pick up the signs of the presence of such a famous fugitive,” Malik is reported to have said.

The Abbottabad commission after interviewing officials from the ministry of interior observed in its findings that “the administrative confusion about who is in charge of what, resulted in lack of coordination and a turf war between organisations. When adverse developments occurred a game of passing the buck took place.”

Commenting on the statements of Pakistan’s Ambassador to the UK Wajid Shamsul Hassan on international media where he claimed that “whatever has happened, has happened with our consent,” the commission observed that seldom has a high commissioner made a more dishonest or absurd statement without any clearance from his superiors.

The commission noted that the defence minister’s testimony was disarmingly candid where “he seemed to recognise that, as a civilian, he had no authority to meddle in defence and security affairs.”

The commission had investigated around 46 questions from several dozens of officials and civilians to compile a comprehensive report on the incident.

On the night of May 2, when US helicopters were hovering over the compound, the commission quoted Amal, one of the wives of al Qaeda chief as saying that she reached to “turn on the light but the Shaikh said “No” and then told her wife and children that American helicopters had arrived and they should all leave his room immediately. “The Shaikh reached for his weapon.”

After the raiders killed OBL, they asked his daughter to identify the body, and his daughter said “my father.” Her other sister was asked the same question and she replied “Abdullah Bin Muhammad” which puzzled them.

Maryam, wife of Ibrahim, said the American soldiers spoke Arabic and Urdu. She said that the Americans were in the house for between 30 minutes to an hour from the time they killed Ibrahim. The commission noted that Maryam’s testimony was generally credible but some parts were suspect.