Search for alternatives: Pakistan to seek drone technology from US

Search for alternatives: Pakistan to seek drone technology from US

Senior offici­al says the propos­al will be presen­ted before Kerry during his visit.
By Kamran Yousaf
Published: July 8, 2013
Tweet Email 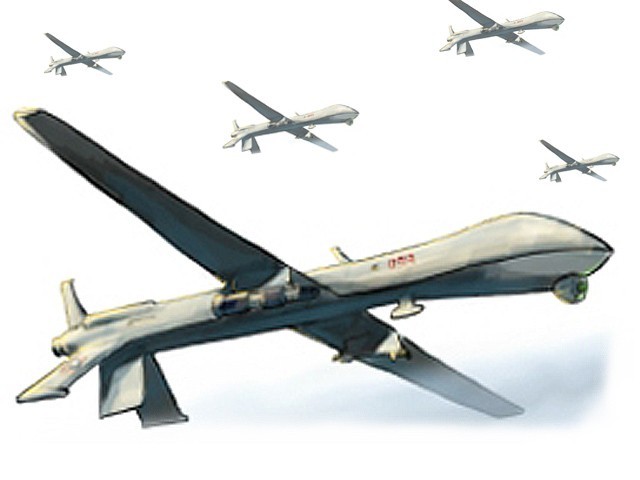 The government have no intention to adopt any confrontational approach on drone attacks, says an official. .PHOTO: FILE

ISLAMABAD: The government will soon formally request the United States to transfer drone technology as part of the diplomatic efforts seeking an end to the stalemate over the CIA-led campaign in Pakistan’s tribal areas.

A senior government official, who is engaged with the US on the subject, told The Express Tribune that preliminary discussions between the two countries to find alternatives to drone use have already started.

The official, who asked to remain anonymous because of the sensitivity of the issue, disclosed that Adviser to the Prime Minister on National Security and Foreign Affairs Sartaj Aziz and US Secretary of State John Kerry discussed the proposal in their recent meeting at the sidelines of Asean Regional Forum in Brunei Darussalam.

It is unclear, though, whether the US will heed the call – the previous government made similar unsuccessful requests at several occasions.

According to the official, however, the new administration is confident its efforts will yield a ‘positive outcome’. The government is upbeat due to the fact that unlike the previous administration it does not have any secret understanding with the US on drone use, he added.

The official said the formal proposal seeking the transfer of drone technology will be made during the upcoming visit of US Secretary of State John Kerry. Kerry is due to travel to Islamabad by the end of this month. According to another official, Prime Minister Nawaz Sharif will also table the proposal before the heads of political parties, who are scheduled to meet this week to discuss the country’s national security policy.

The use of unmanned aerial vehicles by the US to take out what it believes are high value targets associated with al Qaeda and the Taliban in the tribal regions has been the source of friction between Islamabad and Washington.

Although, reports indicate that top al Qaeda figures and other hardened militants were among those killed in a recent drone strike, Islamabad has publicly condemned such strikes as a violation of its territorial integrity and sovereignty.

Interior Minister Chaudhry Nisar Ali Khan also recently warned that the continued US drone attack could lead to direct standoff between Pakistan and the US.

However, another official, who advises the government on foreign policy issues, attempted to play down his statement.

“We will have to find a solution to this drone use through mutual understanding. Shooting down drones is not the answer,” he argued, referring to demands for an aggressive approach to stop US drone attacks. The official said the government would not only seek transfer of drone technology but also address US concerns on ‘terrorist hideouts’ in the tribal areas.

When contacted, a foreign ministry spokesperson confirmed that Pakistan was seeking the transfer of drone technology from the US to deal with terrorist threats in the tribal belt.