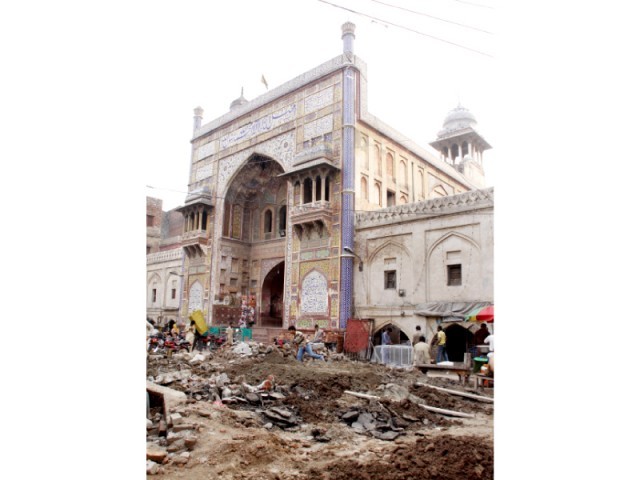 A view of Masjid Wazir Khan from where encroachments were recently removed. PHOTO: ABID NAWAZ/EXPRESS

The Walled City of Lahore Authority (WCLA) has started testing a new geographical information system (GIS) to help it regulate conservation and development work at the city’s historic quarter.

The GIS, developed in collaboration with the Aga Khan Trust for Culture (AKTC), will, apart from other things, help “cater to all the functions performed and activities carried out for the conservation, preservation, control and management of heritage sites,” said Tanya Qureshi, a communications official at the WCLA.

“In the case of the Walled City, which is a collective of urban heritage sites, the management process involves a gamut of regulatory activities: listing of buildings and sites of special value, land use control, fiscal measures and processes, regulating construction and conservation, regulating demolition, licensing and so on. These activities involve administrative actions performed on a case by case basis, in respect of every specific parcel of land which constitutes the heritage city,” she said.

Located in the northwest of Lahore, the Walled City has an area of 2.56 square kilometres and is home to landmarks like the Badshahi Masjid and Lahore Fort.

Kamran Lashari, the director general of the WCLA, said the GIS would minimise administrative delays in the development process by making it much easier for members of the public and property owners in the area to submit applications for development. It would also make the decision-making process more transparent and efficient by maintaining updated digital information on the Walled City. “The 22,000 or so properties of the Walled City have been brought onto the GIS. It gives the facility to access data on any property at the click of a button,” he said.

The Punjab government and the AKTC signed a public-private partnership agreement in July 2007 for three years to jointly pursue heritage-sensitive planning and development objectives in the Walled City. The WCLA was set up in April 2012 as an autonomous body meant to preserve historic sites and promote cultural activities and tourism.

Shuaib Latif, an IT expert at the WCLA, said that in the three years, AKTC had invested in several planning initiatives. A strategic plan was completed in 2008 and has been the basis for physical and socio-economic development in the area, he said. Baseline surveys were carried out comprising a topographical map of the Walled City, an inventory of all 22,800 properties and a socio-economic survey of 1,757 households.

“This information was used to establish an operational GIS system for the Walled City, which has proved invaluable for several purposes like identifying buildings of architectural merit and historic value, correlation of building-related data by age, structural conditions, heritage value and ownership, correlation of structural conditions by income level, and photographic images of each building,” said Latif. The new GIS was based on the system established by the AKTC, he said. But to get the full benefit, the government would need to train municipal personnel and acquire software licences and hardware, he added.

Latif said that the new system would increase the efficiency of the WCLA in processing applications for building permits, demolition permits and new schemes. Web-based GIS applications would improve data integration and sharing through public participation.

“Ownership data exists only to the extent of PT-1 forms of the Excise and Taxation Department, or in the case of recent property transfers, in the form of registration documents in the District Registry. The new GIS will help implement the development of a new property ownership record, as well as in collecting and digitising all property tax assessment registers. In addition, the system will enable systematic planning for infrastructure investment and service provision and maintenance,” he said.