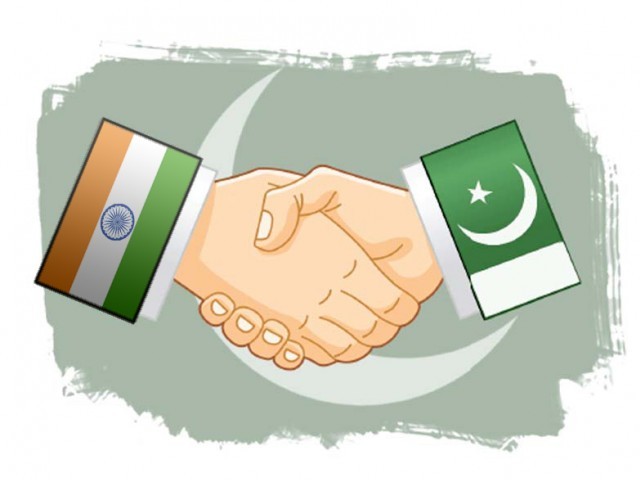 A number of Indian analysts and Pakistani experts on the region united for a successful dialogue. ILLUSTRATION: JAMAL KHURSHID

A draft resolution on peace recommendations for India and Pakistan through trade and other measures were presented by former ambassador Sherry Rehman at Jinnah Institute’s 3rd Islamabad Dialogue which concluded on Friday.

As the two day Islamabad Dialogue came to an end, a number of Indian analysts and Pakistani experts on the region united for a successful dialogue.

At the event, President Jinnah Institute Sherry Rehman said, “We need to give leverage to democracy in both counties – such steps ensure sustained development.”

According to the joint statement, Pakistan should consider allowing overland transit through the Wagha-Attari border for trade between India and Afghanistan.

Moreover, experts were of the view that both security establishments must engage to share their perceptions on Afghanistan and should take each other into confidence regarding their concerns about post-2014 Afghanistan.

Secondly, it was recommended that intelligence sharing should be done at the highest level, keeping in view the common threat from terrorism.

Other issues such as human rights concerns in Kashmir, arrests of fishermen, prisoners of war and other prisoners also came under discussion.

The resolution stipulated a “no arrests of fishermen” policy and asked for the establishment of marine risk reduction centres with the ability to communicate with each other. The lack of a maritime boundary was identified as a fundamental obstacle to resolving the issue.

On the issue of Kashmir, participants stressed on the need to commit to implementing confidence-building measures on trade and travel related to Kashmir and bilateral discussions must be kept

There was also an increased emphasis on facilitating travel by catering to an increasing number of entry points on land routes.

The panel roundly condemned the recent tit-for-tat murders of prisoners and called on the two governments to make efforts to prevent such incidents from being repeated.  “For the first time we spoke about prisoners,” Sushobha Barve, an Indian panelist, told The Express Tribune. “It is a step by step process and we can do it!”

Speaking to The Express Tribune, Kavita Srivastava, an activist working on Pakistani prisoners in Indian jails said prisoners should not be allowed to be the target of politics.

Jatin Desai, journalist and peace activist working with fishermen told The Express Tribune, we saw hope and expectations during and even after the elections. “The world is moving and scenario of violence is what the people are fed up of,” he said.

The Islamabad Dialogue III was the result of collaboration between the Jinnah Institute and New Delhi’s Center for Dialogue and Reconciliation. The conference was being held for the third consecutive year, and continued in its aim to promote peace between Pakistan and India through Track II diplomacy.