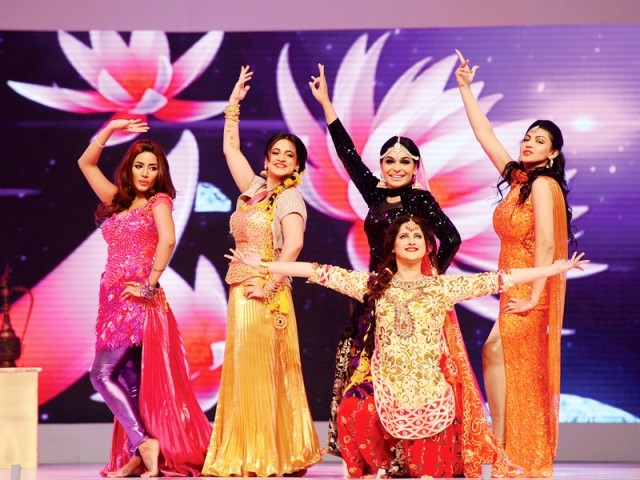 The much-awaited 12th Lux Style Awards took place on Thursday night at the Expo Centre Lahore. Talented artists from all walks of the entertainment industry – designers, models, actors, photographers and musicians – all gathered at one place to commemorate their peers and celebrate their achievements from 2012.

The Lollywood-centric performances included a total of five songs performed by four Lollywood actors, along with late-night talkshow host Mathira. Mathira, Sahiba, Sana, Noor and Meera Jee lit the stage with their performances. The choice of using yesteryear’s hits such as Aaj Meera Nache Gi, Akh Lari Bado Badi, Tu Je Mere Hamesha Kol Rawain, Tere Naal Naal Wey Main Rehna, Luddi Hai Jamalo Pao for the performance was intelligent, as it encouraged the audience to sing along. The performances were entertaining and lively, especially that of dancing queen Noor but the outfits worn by these Lolly beauties were abominations. We understand that outfits for stage performers need the extra bling and drama, but these gola gunda-inspired creations were simply an eyesore.

Ahmed Ali Butt hosted the LSAs again after his performance last year. Though one expected him to strive to perform better than last year, it was quite disappointing to see that apart from three jokes and a video, everything Ahmed Ali Butt had to offer was either flat and crass or simply tacky. Also it was a sheer embarrassment to see the announcer fumbling and announcing incorrect names. Though admittedly the most entertaining part of Ahmed Butt’s performance was his rendition of Taher Shah’s Eye to Eye – very well executed and supremely funny.

Humaima Malik performed to Nusrat Fateh Ali Khan’s celebrated Afreen Afreen with grace and natural rhythm. In comparison, Aamina Sheikh, who had a futuristic, sci-fi-inspired performance, paled. The choreography fell flat and she looked like she was trying too hard. We love Aamina and think she is a brilliant actor, but performing such choreographed sequences is not up her alley.

Faras Shafi and Mooroo’s performance was by far the most interesting one of the evening. The futuristic flashlights and oversized glasses fit perfectly with the essence of the performance. Faras Shafi wearing a wife-beater over his shalwar added more to this character on stage.

Atif Aslam’s finale performance was a hit, not because of the singer himself rather because of the children dancing with him. These young dancers were by far the best performers we had seen all night and one can only wish they had come earlier to entertain the crowd. Young Aryan Aslam completely took over the stage and over-shadowed Atif’s presence. Thanks to their perfectly executed and thoroughly entertaining dance moves, the evening ended on a great note.

The best acceptance speech was made by Farhad Humayun, who chose to speak in Punjabi. It was commendable that he reached out to his fans and band members. Hands down one of the most touching speeches of LSA 2013!

Mehreen Syed, winner of Model of the Year, was seen arm in arm with her husband Ahmed Shaikh, looking as happy as a newly-wedded lady could be. At one point, she refused to take any more questions from the press, and said, “My husband is waiting for me.”

Designer Shehla Chatoor had an army of ambassadors at LSA 2013! From Lollywood actor Sana to performer Mathira, model of the year nominee Amna Ilyas, album of the year winner Ayesha Omar, Frieha Altaf and Unilever’s Fareshteh Aslam, it seemed that every second person was wearing Shehla Chatoor dresses in metallic colours or digital prints. A source tells us that presenter Humaima Malik was also meant to wear Shehla Chatoor, but on the condition that Shehla dresses only her and no one else at the event. When Shehla refused, Humaima wore a lovely gold one-shoulder dress by Layla Chatoor.

Brace yourselves for something disturbing. Some guests at the red carpet were intrigued when Meera ji introduced a gentleman in a blue jacket as her boyfriend. While the entertainment industry buzzed with the news that Cupid has struck for this Lollywood lady, her family clarified that Meera ji ‘pyaar se’ introduces her brother as ‘my boyfriend’.

Ahmed Ali Butt and Mathira’s attempts to grab the audience’s attention, by dragging guests for an impromptu dance performance, were quite entertaining. While Nomi Ansari was too shy to break into a move, journalist Zurain Imam, singer-actor Ayesha Omar and designer Ali Xeeshan’s moves on hit Bollywood item songs added some much-needed life to an evening that seemed to drag on forever.

The winners of the LSAs under the music category were rather disappointing. More than half of the better artists from last year were excluded from the nominations and those who made it were not done justice to. The most absurd and rather hilarious was the Best Album award that went to Ayesha Omar for her album Khamoshi against iconic albums like The Harvest by Sajid and Zeeshan. Despite Faisal Rafi’s finesse with music production and Omar’s improved vocals, Khamoshi does not close to the quality and innovation of The Harvest.

Katna Nai by Sajjad Ali won the song of the year award and rightly so, given the limited amount and variety of nominations. This just goes to reiterate our love for established artists and our rather sad behaviour towards newcomers like Jarar Malik and Mooroo who actually had something new to offer to our industry. How could Ali Zafar be nominated and not get an award?! Shahi and Zoe had given us a brilliant new-age sound of Arshad Mehmood’s melody for Tanhaiyan Naye Silsilay but unfortunately that was ignored.

No one in the audience seemed to understand the purpose behind awarding Ustad Nusrat Fateh Ali Khan being posthumously given the Lifetime Achievement Award over a decade after his passing.

As far as the fashion awards are concerned, we strongly feel that Kamiar Rokni or Salim Chatoor should have bagged the Best Dressed Male award for having immaculate style. Aamina Sheikh, for the Best Dressed Female award, seemed like a very biased choice since she is not only the brand ambassador for Lux but was also styled by Nabila, the official stylist for the event. It was no surprise to see Nabila bag the Best Hair and Make-up artist award. It’s high time she is given a Lifetime Achievement award instead.

Album of the Year: Khamoshi by Ayesha Omar