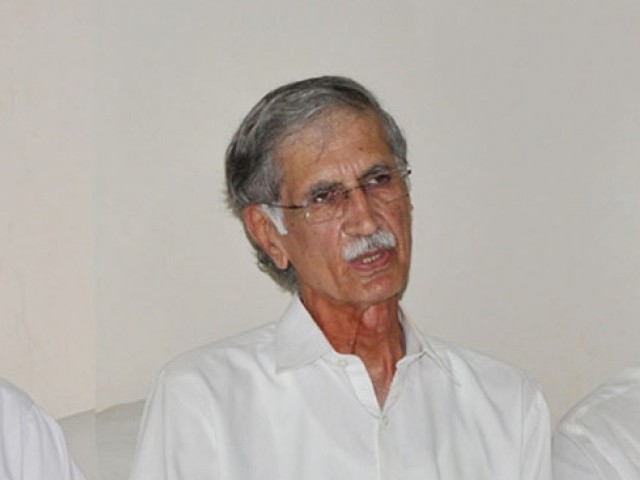 PESHAWAR: Chief Minister (CM) Pervez Khattak condemned the bomb attack saying the ‘imposed’ war on terror was the biggest impediment for development in the province.

“War is not the answer, and we have requested the federal government to include all stakeholders in finding a resolution to this conflict,” said Khattak according to a statement issued by the Pakistan Tehreek-e-Insaf’s (PTI) media cell. The CM also expressed condolences with the victims’ families and assured them financial compensation.

Provincial Information and Health Minister Shaukat Yousafzai also condemned the incident and said it was a result of the previous government’s flawed policies. He said negotiations were the only way forward to find a peaceful solution to on-going militancy in the region. “This issue would have been solved if a military operation was the solution.”

Meanwhile, PTI’s Central Deputy Information Secretary Shah Farman levelled accusations against the US and criticised Pakistan for continuing to assist the superpower in the war on terror.

Talking to journalists at the site of the blast in Badhaber, which killed 17 people including several minors, Farman said the US’ military involvement in the region and Pakistan’s on-going support for the war had led to a fast-deteriorating law and order problem.

“Leaders, for the sake of American dollars, jumped into the US’ war which resulted in the killing of armed forces personnel and scores of Pakistani citizens,” Farman asserted while explaining what he believed were driving motives behind the prevailing lawlessness in the region.

“It is not Pakistan’s war. Once we distance ourselves from it, peace will prevail,” he exclaimed, adding a single drone attack created hundreds of suicide bombers. Farman added it was not possible for cruelty and peace to co-exist. “For sustainable peace, there must be a governance system based on justice and equality.”

Recently, the PTI has come under fierce criticism for not openly condemning terrorists and sectarian elements, whose violent activities have led to the deaths of approximately 100 people since the party came into power.