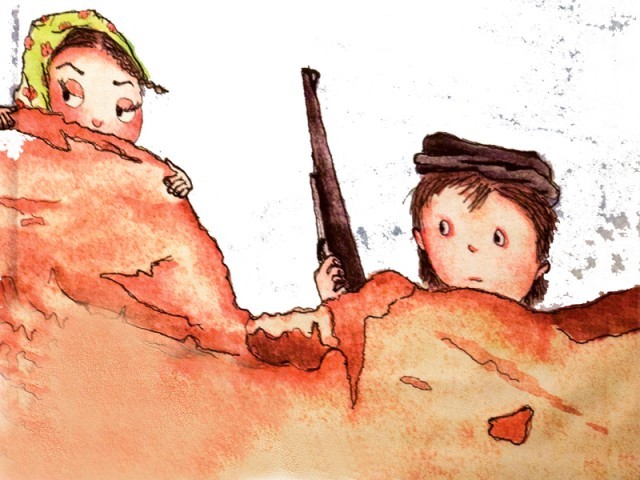 The heart-wrenching tale of a young Afghan girl Basrabia, is set in a time when Soviet tanks rolled into the mountains of Afghanistan, decimated whole encampments and silenced scores of singing, laughing and wailing Afghan families.

Fifteen years after she wrote her third book Blasphemy, Tehmina Durrani-Sharif confirms that she writes from the heart. Her latest offering, the 203-page Happy Things in Sorrow Times will be wept for and sighed upon, and cherished for a long, long time.

The heart-wrenching tale of a young Afghan girl Basrabia, is set in a time when Soviet tanks rolled into the mountains of Afghanistan, decimated whole encampments and silenced scores of singing, laughing and wailing Afghan families. The author’s writing fuses the era’s politics and her own storytelling prowess with such breathtaking perfection that one can’t help but feel the IED explosions, the anxiety, the sorrow and the terror as the pages are turned. Good fiction constantly engages every sense and Durrani-Sharif’s writing evidences she is well-aware that good stories aren’t just read — they are heard, seen, smelt and felt.  Her pen creates images where the sight of towering mountains, the sound of chattering women and the feel of a dead mother’s silk frock are conjured to convey Basrabia’s plight.

Durrani-Sharif’s character Basrabia is quite the Jane Austen heroine — or perhaps one that rivals her! Despite her humble origins and poverty, Basrabia has nerves of steel and an imagination which delights one to no end. She is fearless, thoughtful, resentful of authority and extremely intelligent — the way women should be.

The reading experience is enhanced by 38 simple yet thought-provoking water colour paintings used as illustrations, done by Durrani-Sharif herself. But the book cannot be dismissed as ‘light’ fiction for the seasonal book worm; it stands has a text which confronts stale political narratives on modern-day Afghanistan — particularly on ‘militants.’ Durrani-Sharif shows that these militants were much more than Soviet pawns who served as a menace for enemies – they were human. They cooked bread; they told stories; they had colourful lives.

In her marvelous fourth published work, Durrani-Sharif has re-focused the spotlight on a graver real story with her words. Happy Things in Sorrow Times should be remembered not just as a great story, but also a book that shifts the paradigm. It is good enough to draw the attention of some prestigious global awards.

Book launch: The plight of the war child