Education for all: 36 young fellows start journey to teach Pakistan

Education for all: 36 young fellows start journey to teach Pakistan 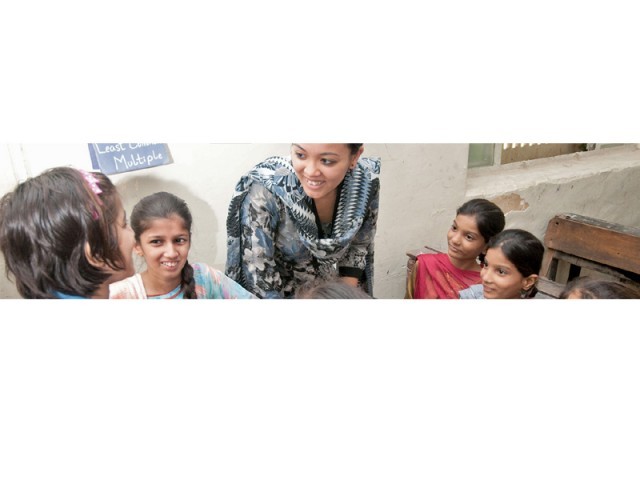 Teach for Pakistan started its education-for-all initiative in August 2011 with an aim to provide underprivileged children the same education available to students from prestigious institutions. PHOTO COURTESY: TEACH FOR PAKISTAN WEBSITE

Around 36 young Teach for Pakistan fellows are now getting ready to teach Pakistan and carry on the journey that Tooba Akhtar, a Lahore University of Management Sciences alumnus, chose to start around two years ago.

These fresh graduates of some of the prestigious institutions across the country and abroad will form the third batch of Teach for Pakistan fellows.

For most people of Akhtar’s age, the idea of teaching grade three to grade eight public-school students for a monthly stipend of only Rs25,000 is hardly the life they imagine after graduating from prestigious colleges. But for Akhtar and her friends, the need to take some practical steps to fix the deteriorating education system in the country was a more pressing need.

Perhaps for this reason, Akhtar believed this transformation was something intrinsic to the fellowship programme – an initiative of the Aman Foundation. They partnered with the international ‘Teach for All’ global network of similar enterprises, working to eliminate educational inequity in more than 27 countries.

“For the next two academic sessions, we offered the same or even better quality of education to disadvantaged children as availed by us,” she recalled. To achieve that end, some of the programme’s inaugural fellows had to convince their parents that they were not wasting their futures and education by not applying for corporate jobs.

Akhtar has played a significant role in changing several lives at Government Girls Secondary School near Abdullah Shah Ghazi’s shrine but she can hardly forget 14-year-old Saniya, who she saved from dropping out of the school. Her persistence in persuading Saniya’s parents continued to the point when the girl’s father finally changed his cellphone number, Akhtar smiles as she narrates.

The girl did not show up for about two months and then one day she sent a folded piece of paper along with another student that had her father’s new cellphone number. The note also told Akhtar that Saniya’s father was in a good mood to talk to her. Akhtar did not hesitate and finally managed to get the girl back to school.

“We often forget that all parents want to see their children prosper,” she said. “It is just that they have different priorities as per the circumstances they have been conditioned into. It is up to us and how well we convince them to prioritise education.”

The six-week summer training for the third batch of fellows commenced on Wednesday before their final placement at 24 schools in Karachi and five in Lahore. In addition to learning about the national curriculum, child psychology and community relations, new fellows also learn leadership qualities and innovative teaching methodologies that lead their students to ambitious academic growth.

“Your classrooms may be hot and lack electricity and you may not have enough desks or books, but we know that a high quality teacher can do more to change a student’s life than fans and desks,” Teach for Pakistan CEO Khadija S Bakhtiar told her new fellows. “Be the ‘teacher’ and leave your students independent, empowered and inquisitive.”

Founded in 2010, Teach for Pakistan is premised on the belief that leadership in the education sector is the key to transforming classrooms and communities, ultimately fixing the broken system, said Aman Foundation CEO Ahsan Jamil.

To make sure that underprivileged students also receive top-notch education, Teach for Pakistan hand-picks the best graduates to teach at public and NGO-owned low-resourced schools – but not before they go through six months of rigorous training, says the 28-year-old Teach for Pakistan CEO Khadija S Bakhtiar.

Prospective fellows, an overwhelming majority of whom studied from the Institute of Business Administration and Lahore University of Management Sciences while others studied abroad as well, underwent a rigorous three-stage selection process.

Bakhtiar added that most of the young graduates join with a passion of dedicating two years of their lives for the cause. “Even this passion is something very valuable and we rely on this to move on with the programme,” said Bakhtiar. “This two-year association, however, makes an unforgettable connection with the children, in which the fellows have live experience of transforming others’ lives with their efforts and that keeps them associated with the cause in different capacities for the rest of their lives.”