Man of Steel: No Kryptonite for new Superman movie

Man of Steel: No Kryptonite for new Superman movie 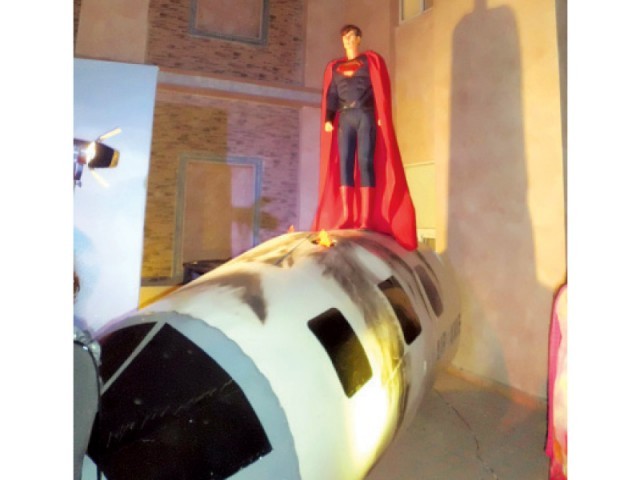 A blistering hot Friday evening was not enough to stop fans of Krypton’s last son from showing up in droves for the premiere of Man of Steel.

The Arena in Bahria Town played host to a red carpet premiere for the movie, the ‘latest’ installment in the Superman film series. Since the movie is a reboot, there is no direct connection between Man of Steel and the Christopher Reeve-Brandon Routh movies, and anyone who saw Superman IV will tell you that is definitely a good thing.

The setup around the red carpet area included cut outs of action sequences from the movie, a Kryptonite display, and part of a crashed jet plane with Superman posing on top. Incidentally, the model man of steel was locally-made, which organiser Farooq Butt of Nucleus Events was quick to point out.

The Coca Cola-sponsored premiere was attended by notables from the local independent film scene including directors Bilal Lashari, Hamza Ali Abbasi and Usman Mukhtar, rapper Adil Omer, and a number of other famous faces from the twin cities’ social circuit.

At the gate, Shehryar Yousaf, a university lecturer and Superman fan, said he had high expectations of the movie and was hoping for a summer superhero epic, while Haider Khan just wanted a smash-boom-bang summer movie.

Hardcore fans were engrossed in the first half of the two-and-a-half hour movie, although some found the relatively low amount of action early on to be a downer.

An impromptu concert outside the cinema hall during the interval raised their spirits just in time for an action-packed second half.

After the movie, Yousaf told The Express Tribune that he was impressed by the movie and thought it “presented a good set up for sequels” including a Justice League movie.

Some people were less than satisfied with the development of some minor characters and the plot in general. However, interior designer Zahra Zaman said, “There is only so much you can fit into one movie,” before adding that she had enjoyed the overall experience.

Meanwhile, Mukhtar excitedly said, “I have been waiting to see this movie since forever. My patience paid off as it was an amazing movie.”

Man of Steel earned $116.6 million in its opening weekend at the box office, giving it the largest all-time opening in June, as well as the second largest opening of the year behind Iron Man 3. It has already grossed $242 million worldwide in its first week.