Bomber made his way into the prayer hall as his accomp­lices opened fire on the guards.
By Riaz Ahmad
Published: June 22, 2013
Tweet Email 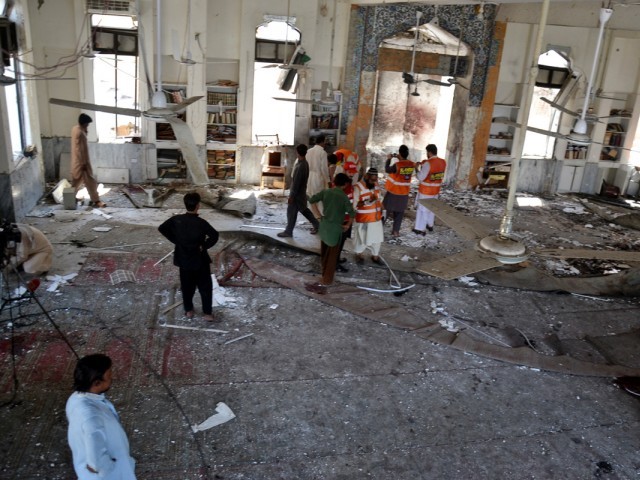 At least 15 worshippers were killed and more than two dozen injured Friday afternoon in a suicide and gun attack at an Imambargah-cum-seminary on the edge of the provincial capital.

The Tehreek-e-Taliban Pakistan (TTP) denied it had a hand in the deadly attack that took place in the Shia-dominated Gulshan Colony in the jurisdiction of Chamkani police station.

A suicide bomber entered the main prayer hall of Madrassah Hussainia, popularly known as Madrassah Arif Hussaini, just as his two accomplices opened fire on the security guards, police said. The bomber ran up to the prayer leader’s pulpit and detonated his vest, police added.

Seven worshippers died on the spot and others succumbed to their injuries on way to hospital, medics confirmed to The Express Tribune, revising an earlier casualty figure from Additional Assistant Commissioner Namatullah who said 13 worshippers were killed and 25 injured. The injured include four children, believed to be students of Madrassa Hussainia.

Syed Mehdi, 17, the grandson of Allama Arif Hussaini, the founder of the madrassa and prominent Shia scholar, was also among the dead.

“The three attackers opened fire on the guards deployed at the main gate before making their way into the Imambargah. The suicide bomber blew himself up while his accomplices managed to escape,” SP Rural Shaifullah told The Express Tribune.

The prayer leader, Syed Abid Shakir Hussaini, said the bomber struck moments before he entered the main prayer hall. “Inside, the scene was grisly: worshippers were lying in a pool of blood; some were already dead others were crying for help. The bomber’s body parts were scattered in the hall,” Hussaini told The Express Tribune.

“They [attackers] shot a policeman and our guard deployed at the gate before entering the main prayer hall where worshippers were waiting for the Friday sermon,” he added. The body of the police guard, Alamdar Hussain, was recovered from a nearby nullah, while the private guard was hospitalised with critical injuries.

Eyewitness Mehdi Hussain said that moments before entering the Imambargah he heard gunshots followed by a powerful explosion. “A cloud of dust and smoke covered the entire structure. We rushed into the main prayer hall where injured worshippers, including children, were crying for help,” he said. He added that the bomber also carried a pistol which was later recovered from the prayer hall.

The casualties were transported to the Lady Reading Hospital (LRH) where six of the injured were said to be in a critical condition.

Bomb Disposal Squad official Abdul Haq said that the bomber carried at least six kilogrammes of explosives in his vest. “We’ve found the body parts of the bomber including his skull,” he added.

Police said the madrassa administration had been constantly threatened by terrorists. “Apart from a policeman, private guards were also deployed at the gate of the madrassa,” said an official of the local police station. “At the time of the attack, there were few worshippers at the Imambargah.

It was the second attack against the Shia community within three weeks. Earlier two people were killed in a bomb blast in Imamia Colony, Gulbahar.

Terror strikes: Screams of anguish fill the corridors of LRH, yet again