The Bollyw­ood film is based on the life of former athlet­e Milkha Singh.
By News Desk / Rafay Mahmood
Published: June 20, 2013
Tweet Email 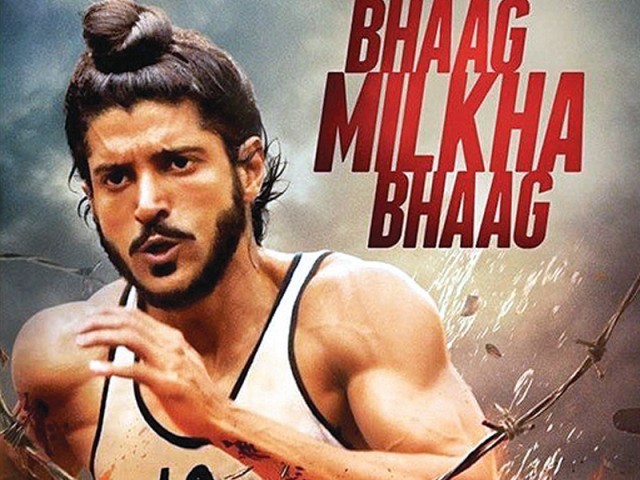 The Bollywood film is based on the life of former athlete Milkha Singh.

In the recent past, we have seen the censor board ban the release of big films like Ek Tha Tiger, G.I Joe and Agent Vinod in Pakistan. With the much talked about Bolly flick Bhaag Milkha Bhaag set for a worldwide release on July 12, rumours about the film being banned in Pakistan are rife. Will the Pakistani audience be deprived of the Farhan Akhtar, Sonam Kapoor and Meesha Shafi starrer?

Director and producer of the movie Rakeysh Omprakash Mehra refutes the notion that the film is being banned in Pakistan. “Today, we have received three different offers from Pakistan — an invite has also come in for the crew, which doesn’t come very often,” he said at the promo and music launch of Bhaag Milkha Bhaag on Wednesday, according to IANS. He added that it is being said that the film “will result in the revival of cinema in Pakistan”.

While the film’s cast and crew are optimistic about its release, film industry professionals in Pakistan still consider its arrival uncertain. While there is no mention yet of censorship as a result of sensitive or controversial content, uncertainty prevails due to its Ramazan release, as well as the new taxes being levied on film imports from July.

“Most Hollywood releases in Ramazan are expected to be pushed till after Ramazan,” Asim Qureshi, Ceo of Brand TV and Brand Cinema, told The Express Tribune.

“For Indian films, tax implementation amounting to about Rs100,000, coupled with a reduced number of shows in Ramazan, affect the financial returns,” he said.

He added that unlike Hollywood films , Indian films don’t have the margin to be delayed, in which case they are either released on time or not at all.

The movie is based on the life of former athlete Milkha Singh. Mehra emphasised that it’s not based on sports and could have been about anyone — it was made with the objective of showing the power of dedication and spirit. “I will like to clarify that the film is not based on sports or about a sportsman. It is about the triumph of the human spirit,” he said. “What I saw was a story of a boy who lost his parents in his childhood at the age of 12. He then goes on to make his country proud.”

Akhtar, who has been seen in films such as Zindagi Na Milegi Dobara and Rock On!!, said that he feels honoured to have the opportunity to play Milkha Singh. “The opportunity of acting or directing a film on someone so inspirational is rare. I am so happy that I got this opportunity. I promised Milkha ji that I will put in a lot of effort,” said Akhtar.

He went through intensive preparation to play the character. “I had to change my running style completely. The training was totally different; you have to build up your endurance and stamina,” he continued. “But the purpose of the film was higher than what we were doing; this removes your ego from the picture. You try and put in whatever is required to achieve the [main] goal.”

“We were all inspired by Milkha Singh’s life. We never felt anything was tough [while shooting the film],” Akhtar admitted.

The film is also close to Sonam’s heart, as she was seen teary-eyed at the film’s promo and music launch. “The promo shows the blood, sweat and toil of everyone who has worked in the film. This is why I started crying,” she said.