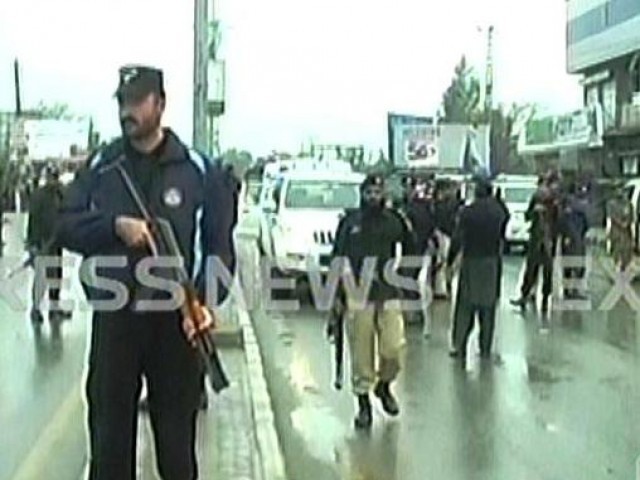 MPA Imran Khan Mohmand, who is said to have been the target of the attack. PHOTO: EXPRESS

SHERGARH: Shergarh was cloaked in grief on Wednesday with tearful friends and relatives dotting graveyards where the victims of Tuesday’s suicide blast were laid to rest.

The death toll from the terrorist attack has increased to 36, while over 60 people are reportedly injured.

Hundreds of people visited Haji Taj Muhammad, the father of deceased MPA Imran Khan Mohmand, who is said to have been the target of the attack. People quietly wept as they offered words of condolence at Taj’s hujra.

While addressing members of the press, Imran’s brother Jamshed Khan promised he would accomplish the mission of his brother. “Imran is a martyr, and he will eventually achieve whatever he struggled for.” Jamshed said Imran started his political career to serve his constituents and lost his life to the cause.

Even in shock which accompanies personal loss, Taj was proud of his son because he was martyred serving his people. The grieving father said he knew he was not alone; an entire nation was mourning Imran’s death with him. “I will not let down my son’s mission and we will accomplish it by restoring peace in the region.”

Sherpao said the grim law and order condition is not isolated to one area, but it has spread to the entire country. Without wasting any more time, Islamabad should lay out a policy to tackle the issue, restore peace in the region and save the country from further destruction, he stressed. If the policy is planned in accordance with the will of the people of Khyber-Pakhtunkhwa, the provincial government would stand with the centre and help at every step, the senior QWP minister said.

However, he said, militancy cannot be nipped by the current government all at once; it would take time. “We want to stop the killing of innocent people,” added Sherpao. The Pakhtunkhwa Milli Awami Party (PkMAP) will hold a peace walk in Shergarh Bazaar today (Thursday) at 9:00am. Local leader Essa Khan Bacha told journalists the walk would be held to condemn the suicide attack.

The Jamiat Ulema-e-Islam-Fazl (JUI-F) Shergarh chapter will also protest against the killings. Its supporters announced a shutter-down strike today.