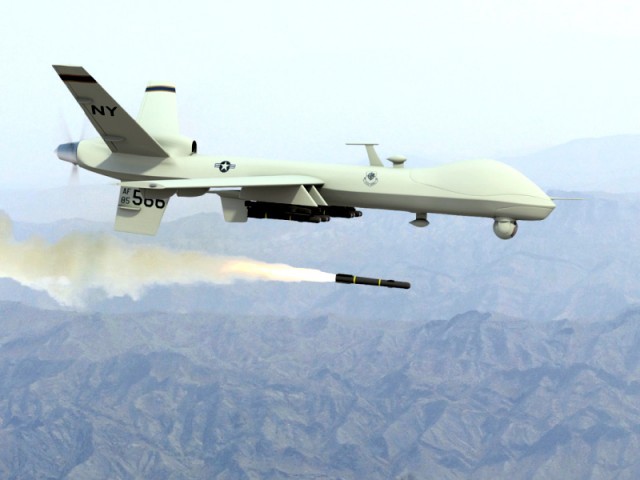 Prime Minister Nawaz had demanded an end to drone attacks in his maiden speech Aziz reminded the house. PHOTO: FILE

The adviser to the prime minister on foreign affairs and national security informed the National Assembly that the PML-N government has clearly told the US that the CIA’s drone programme was counter-productive and a violation of Pakistan’s sovereignty.

“They must stop,” Sartaj Aziz informed the assembly on Tuesday, expressing hope the new government would soon be able to put an end to the controversial drone strikes.

He said the issue will be raised with US Secretary of State John Kerry when he visits Pakistan this month. Dr Shireen Mazari of the Pakistan Tehreek-e-Insaf called out the new administration over the deeply unpopular drone campaign, saying the campaign showed utter disregard for Pakistan’s integrity and sovereignty. She then asked for Prime Minister Nawaz Sharif’s government’s policy on the drones.

Aziz told the lower house of Parliament that Islamabad had conveyed its concerns to Washington in clear cut terms. “The government’s policy is clear. Drone strikes are unacceptable as they are in contravention of the country’s sovereignty,” the Aziz added.

“Pakistan also lodged a strong protest with the US against drone strikes on June 7,” said Aziz, adding that it was the only attack that happened since the PML-N government took over. However, overall 13 drone strikes were conducted by CIA so far this year, he stated.

Not satisfied with his reply, Dr Mazari asked to be told clearly how the government was planning on stopping them in case Washington refused to comply.

“We need to adopt the policy of talks instead of threats to resolve this issue,” Aziz replied. He said Kerry would be told clearly that drones were counter-productive in the war on terror and that they also create problems in strengthening bilateral ties between the countries. Aziz assured the National Assembly that the issue would be raised at the highest level with the American administration.

Prime Minister Nawaz had demanded an end to drone attacks in his maiden speech Aziz reminded the house.

But if the drone strikes persist, the government will seek advice from the people’s representatives in the National Assembly in devising a future strategy, he said.

However, he added that US President Barack Obama’s recent speech – in which he promised closer scrutiny of the CIA programme – was encouraging. “The strong protests by Pakistan and human rights organisations have made a positive impact in raising the issue,” Aziz added.