Annual maintenance: Gas shortages may worsen as fields are shut down

Annual maintenance: Gas shortages may worsen as fields are shut down 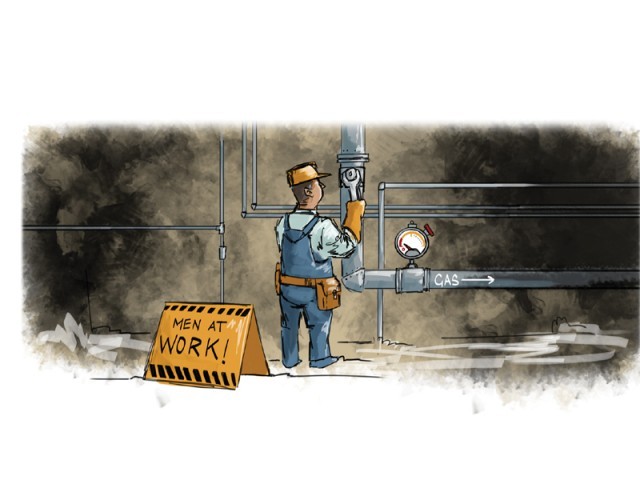 At present, total production of gas in the country stands at 4.2 mmcfd, of which 633 mmcfd will be taken off the system during field maintenance from June to August. ILLUSTRATION: JAMAL KHURSHID

The gas shortage is likely to worsen in the coming months, following a drop of over 600 million cubic feet per day (mmcfd) in supply from a number of fields as a result of annual maintenance work. The exercise may result in the further curtailment of fuel supply to power plants, industrial units and compressed natural gas (CNG) filling stations.

Gas supply to the power, industrial and CNG sectors will be further restricted as and when required keeping in view the position of producing fields.

Khyber-Pakhtunkhwa and Balochistan, which were earlier exempted from the gas load management programme being implemented by the distributors – Sui Northern Gas Pipelines Limited (SNGPL) and Sui Southern Gas Company – can also face gas shortages after supply is stopped from fields that will be undergoing an annual turnaround in the ongoing and coming months, officials say.

The fields where maintenance work will get under way are being operated by exploration companies such as MOL, BHP Petroleum, POLO, Pakistan Petroleum Limited, PEL, Oil and Gas Development Company and OMV.

At present, total production of gas in the country stands at 4.2 mmcfd, of which 633 mmcfd will be taken off the system during field maintenance from June to August.

Officials reveal that the gap between supply and demand has started widening following start of maintenance in gas producing fields of Manzalai and Makori, operated by MOL and connected with SNGPL’s system. OMV’s Sawan and Tajjal fields and BHP’s Zamzama field are also scheduled to stop supply for annual turnaround this month.

According to the officials, in an effort to cope with the increasing shortfall, SNGPL has reduced gas supply to the independent power plants (IPPs) around Lahore from 133 mmcfd to 76 mmcfd with effect from June 15.

Estimates show that natural gas contributes around 48% to the primary energy mix. However, the country is experiencing a severe scarcity of gas because of persistent imbalance between demand and supply on the back of depleting gas reserves and a consistent rise in demand.

The shortage in SNGPL’s system is more damaging than that in SSGC’s network due to the former’s over-stretched network, large number of consumers and new gas supply schemes on which work is underway.