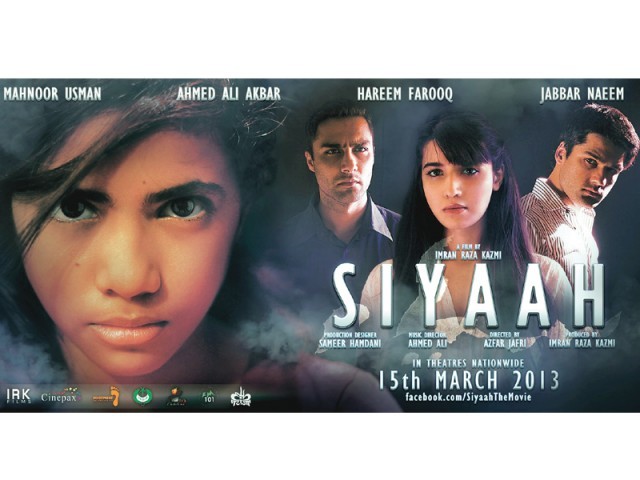 Actor-director feels there has been a radical shift from Lollywood norms. PHOTO: FILE

Osman Khalid Butt represents the new age of Pakistani cinema. The young actor-director seems to be aiming for an all-rounder plaque; he’s written screenplays and has acted in several projects. He has plans to sit in the director’s chair as well.

Butt penned down the screenplay for the film Siyaah — the dream of young aspiring film-makers which turned into a prominent release this year. Despite receiving mixed reviews, he feels Siyaah has opened several doors of opportunities.

“It has given a lot of people inspiration — people who thought making a film wasn’t possible but always had it at the back of their minds, now know that it’s possible,” explains Butt.

After years of desolation, these are interesting times for the film industry as a new breed of film-makers from diverse backgrounds are trying their luck at the art of film-making. Butt started his career in theatre under director Shah Sharabeel in 2005 and left his imprints in the industry. He then continued to pursue the love of this craft and got involved in parody and creative writing and this is how Siyaah was added to his resume.

Butt was approached by producer Imran Kazmi, who was struggling to bring the pieces together. Siyaah is a horror film which focuses on a couple who adopts a girl after losing their only child. Butt had played a supporting role in a horror film before, Omar Ali Khan’s Zibakhana, but had little experience writing a screenplay in Urdu.

“The thing is, I know this may sound elitist, but I think in English — and that reflects in how I would think of a scene [in my mind],” he admits. “Having said that, it was pretty easy to translate at times though.”

Gliding through the challenges, Butt says that he learnt a lot from this experience as he had written the script two-and-a-half years ago. His love for the medium triggered the process and he aimed to create characters that would have lasting impressions on the audience. “We would debate if the horror genre was too niche for Pakistan. But we realised that we could think outside the box and move beyond the gandasa,” he continues.

Butt reveals that he has received several offers from both television and cinema to further showcase his acting talent. His ultimate desire, however, remains to be directing a film — something he is working on currently. He keeps himself busy compiling ideas for short stories which he hopes to start shooting soon. “I’ve always loved acting on stage but I have always imagined myself directing a larger than life or a very masala Bollywood film, due to my upbringing and the type of influences I had growing up,” he says.

Summing up the glory of Siyaah and the prospects of Pakistani cinema, Butt is quick to admit there has been a radical shift from the traditional norms of Lollywood. “If I were to condense it [the situation] in two words, then I would say it’s been quite a revolution,” he says, adding that although there has been talk that the audience has lost interest, one thing is for certain and that is that this industry is all about entertainment. “There is a genuine determination and for the first time [in history], people are looking at this [field] where a possible career can be made.”

“Although people are not expressing it openly, there is genuine excitement [in the air], and within the next three or four years, this could be the beginning of something great for Pakistani cinema,” he adds enthusiastically.

Butt is set to feature in a play called Om Zara and a Ramazan special which will be aired on television. He currently isn’t planning on writing any screenplays but admits it could definitely be a possibility in the future.

Correction: An earlier version of the story incorrectly made use of a different film’s poster. The error is regretted.