How the govern­ment deals with the afterm­ath of these attack­s may well be seen as a precur­sor of things to follow.
By Editorial
Published: June 16, 2013
Tweet Email 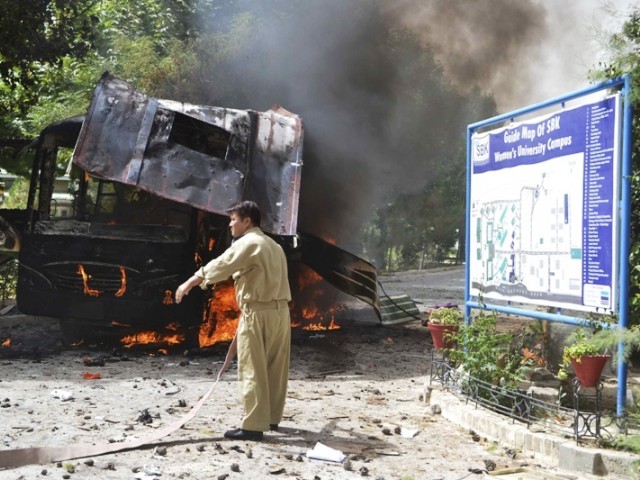 A firefighter stands near a burning bus after a bomb attack in Quetta June 15, 2013. PHOTO: REUTERS

Even as the country was reeling from the attack on the Ziarat residency, which was claimed by the Balochistan Liberation Army, as many as 28 people were massacred in Quetta on June 15, in the first major attack since the new government came into office.

Fourteen girls were killed when a female suicide bomber detonated a bomb in the parking lot of Sardar Bahadur Khan university — the only women’s university in the province — and as the 19 injured were being transferred to the Bolan Medical College teaching hospital for treatment, militants laid siege to the hospital for up to four hours, carrying out other attacks till police commandos stormed the building and freed the hostages. The attacks were claimed by the sectarian terrorist organisation, the Lashkar-e-Jhangvi. The blatant targeting of the heritage of the country and a symbol of its early days and the rampage that followed serve as a blatant reminder to the incoming government of the extent of the challenge the terrorists pose and the terrible threat to the ideology and the people of this country they are. Condemnations have, of course, since followed the attacks, with the Senate and the National Assembly passing a resolution condemning it.

We have in the past, of course, seen a similar sequence of events. But one hopes that this time round, with a new government in place, we will see some change in the way matters are handled. We need to see a complete elimination of terrorism from the country for there to be any respite for its citizens. Till then, we are all vulnerable, and as the events of June 15 have shown us, nothing and no one is safe. There appears to be absolutely no room for apologists or those having a soft stance on militancy of any sort. How the government deals with the aftermath of these attacks may well be seen as a precursor of things to follow, and to keep the confidence the electorate have invested in it and follow through on its responsibilities, the government should act to ensure that such attacks are brought an end to with their perpetrators duly punished under the law. It is condemnable that the perpetrators brazenly own the attacks and yet they and their leaders roam free.