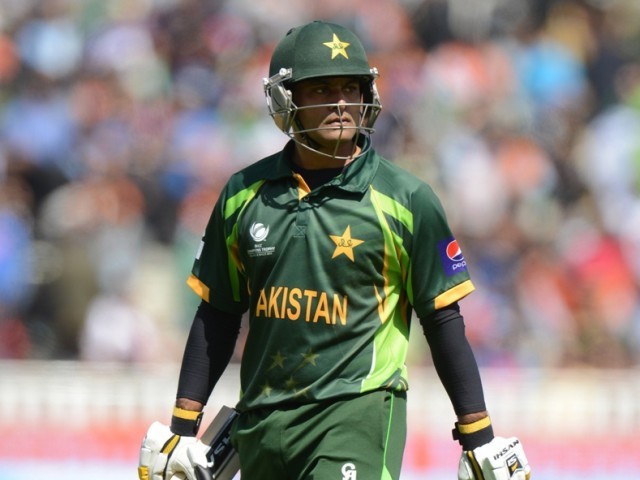 Mohammad Hafeez leaves the field after being dismissed during their ICC Champions Trophy group B match against India at Edgbaston cricket ground, Birmingham June 15, 2013. PHOTO: REUTERS

ISLAMABAD: Pakistan cricket pundits Sunday called for an overhaul of the team’s coaching after their dismal showing at the Champions Trophy ended with a humiliating defeat to India.

After a poor performance on tour in South Africa the batsmen again let the side down, failing to score a single total above 170 in three matches.

Arch-rivals India’s confident display with the bat, easing to an eight-wicket win, was in stark contrast to the Pakistani top order’s scratchy, nervous showing.

“Our batting has been hurting us badly and if we don’t address it quickly our team will go down further at the international level,” Khan told AFP.

“It is time we take strong measures to address this problem.”

Only captain Misbahul Haq, with 173 runs in three matches, batted with any authority, while top-order stars Mohammad Hafeez (38 in three), Shoaib Malik (25) and Kamran Akmal (23) were below standard.

Pakistan were bowled out for 170 in their opening Group B match against the West Indies before slumping to 167 against South Africa and 165 against India in a rain-shortened match.

Khan said the team appeared to have no strategy to tackle the batting slump.

“It’s no comment if you ask me about coach’s contribution,” said Khan, who was replaced as coach by former Australian batsman Dav Whatmore in March last year.

“Just think of it, there was no planning, no strategy and no permanent batting slots.”

Khan said Misbah fought a lone battle at the crease while bowlers were outstanding.

“Our batsmen failed to support Misbah who did very well while our bowling was outstanding but we lost all matches because of poor batting,” said Khan, a stylish opener in his days.

“Whatmore should be sent back because he and other support staff has failed,” said Latif. “New people should come and take over this team which has talent but need better planning.”

He also said the Pakistan’s administrative set-up should be streamlined.

“We always make players accountable but don’t hold the cricket board responsible,” said Latif. “We must streamline the board with some new and wise people and then build this team with better planning.”