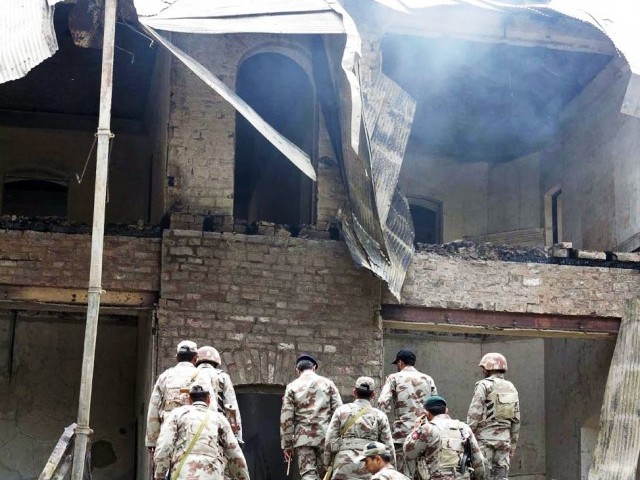 Striking a blow at the very heritage of Pakistan, militants from the Balochistan Liberation Army have destroyed the Ziarat Residency, where Quaid-e-Azam Muhammad Ali Jinnah spent his last days. In the early hours of Saturday, shortly after midnight, at least four militants came down from the nearby mountains under cover of darkness and entered the 19th century building, according to Additional Deputy Commissioner Naseeb Kakar.

Police official Asghar Ali said militants then planted several bombs, though it is not yet clear whether they were timed bombs or remote-controlled devices. Once they detonated, the resulting fire swept through the structure, causing serious damage.

“The Ziarat Residency, which had its balcony, floor and front made of wood, has been totally gutted,” he said.

When they encountered the two security personnel who were deputed at the building, the militants opened fire killing Muhammad Tahir, one of the guards.

The militants then managed to escape unharmed and unhindered. The BLA later claimed responsibility for the attack. According to Interior Minister Chaudhry Nisar, the militants also took down the Pakistan flag that flew at the residency and replaced it with the BLA’s own flag for an independent Balochistan.

Not only was the historic building destroyed in the attack, but the Quaid’s personal effects, which had been preserved as part of Pakistan’s heritage and history, were also reduced to ash along with several portraits of the Quaid.

A fire brigade team was dispatched from Quetta following the attack, and they managed to save at least part of the structure, and the central library near the Residency remained undamaged.  The bomb disposal squad was called in, and officials say another six bombs were defused.

The watchman of the Ziarat residency, Habibullah, narrated his version of events to The Express Tribune, saying, “I was in the washroom when I heard the first blast It was around 1:45 am at night when the attack took place.” He said that he lay down on the floor when the first explosion occurred and then he heard the sound of gunfire. “At least four blasts took place in the Residency, completely destroying it,” he said.

Shireen Rashid, a Quetta resident who was visiting Ziarat told the Express Tribune she was in her hotel room after dinner when she heard the sound of explosions and gunfire. After that the power went out, and it was only later that she learnt that the Residency had been attacked.  “It is a huge loss for Pakistan, and I think it’s a death-blow to tourism in Ziarat,” she said sadly.

“I came here from Quetta to get a break from the terrible law and order situation there, and could never imagine something like this happening here.”

This was a sentiment echoed by IG police Mushtaq Sukhera, who said there has been no warning, and no expectation, of an attack in Ziarat. “This is a peaceful area and people usually come here for rest and recreation,” he said.

Meanwhile, the Chief Secretary Balochistan Babar Yaqub, while condemning the attack, said that even in times of conflict national assets like the Residency are not attacked. “It was an undisputed structure. It had never received any threat in the past. Local people had special love for this site because it had been attracting local and foreign tourists,” he said. “The people involved in the destruction of our national monument will not be spared,” he added.

He also said that Balochistan CM Dr Abdul Malik has promised that the building would be rebuilt and restored to its original condition.

Ziarat is located about 80 kilometres (50 miles) southeast of Quetta, and is a popular tourist spot. The residency building was constructed in 1892, and originally served as a residence for British officers during their visits to Ziarat valley. In 1948 the founder of Pakistan Quaid-e-Azam Mohammad Ali Jinnah was advised to move to Ziarat due to his ill-health and stayed at the building for two months.

After his death, the Residency was renamed the Quaid-e-Azam Residency and declared a national asset. It was later converted into a museum.

(With Additional Input From News Wires)

Climbdown: Salaries of govt employees raised by 10 per cent